SAN FRANCISCO — Google entered a new business beyond Internet search on Wednesday with a service within Gmail to make phone calls over the Web to landlines or cellphones. 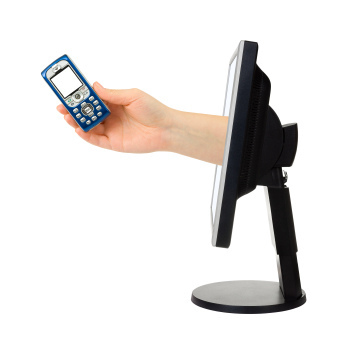 The service will thrust Google into direct competition with Skype, the Internet telephone company, and with telecommunications providers. It could also make Google a more ubiquitous part of people’s social interactions by uniting the service for phone calls with e-mail, text messages and video chats.

“It’s one place where you can get in touch with the people that you care about, and how that happens from a network perspective is less important,” said Charles S. Golvin, a telecommunications analyst at Forrester Research.

Gmail has offered voice and video chat for two years, but both parties must be at their computers. Google said the new service would work well for people in a spot with poor cellphone reception or for those making a quick call from their desk.

After Gmail users install a voice and video chat plug-in to their browsers, they can make a call using their computer’s microphone and speakers or a headset. Calls to numbers in the United States and Canada will be free at least through the end of the year. International calls range from 2 cents a minute to many countries to 98 cents a minute to call Cuba.

This month, Skype filed for an initial public offering of stock with the Securities and Exchange Commission. Skype was acquired by eBay for $2.6 billion in 2005 and was sold last year to an investor group led by the private equity firm Silver Lake.

Skype has an average 124 million users a month worldwide, according to the filing, of which 8.1 million pay for the service to call mobile phones and landlines. Google does not say how many people use Gmail, but analysts estimate that Gmail has 200 million users.

Is it time to get rid of phone books?

Locked or Unlocked? Today, That Is the Money Question

As Data Flows In, the Dollars Flow Out

Googleâ€™s Free Phone Manager Could Threaten a Variety of Services

Multitasking Muddles Brains, Even When the Computer Is Off