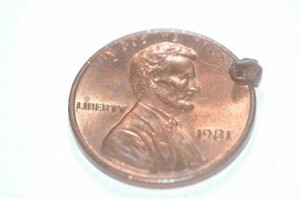 Scientists have discovered a frog the size of a pea, the smallest found in Asia, Africa or Europe, on the Southeast Asian island of Borneo. Adult males of the new micro-species range in size from 10.6 and 12.8 millimeters and the pea-sized amphibian has been named Microhyla nepenthicola after the plant on Borneo on which it lives, according to taxonomy magazine Zootaxa.

Dr Indraneil Das of the Institute of Biodiversity and Environmental Conservation at the Universiti Malaysia Sarawak said the sub-species had originally been mis-identified in museums.

“Scientists presumably thought they were juveniles of other species, but it turns out they are adults of this newly-discovered micro species,” he said.

Das published the paper with Alexander Haas of the Biozentrum Grindel und Zoologisches Museum of Hamburg, Germany. The mini frogs were found on the edge of a road leading to the summit of the Gunung Serapi mountain in the Kubah National Park in the Malaysian state of Sarawak.

The scientists said they tracked the frogs by their call, a series of “harsh rasping notes” that started at sundown. They then made the frogs jump onto a piece of white cloth to study them.

Prospects For Environmental Protection In Afghanistan Improve, Despite Big Challenges