With the recent spike in gas and oil prices even environmentally responsible entrepreneurs like Spencer Brown are finding new ways to cut expenses.

“I’m making products, not buying them from somebody,” said Brown, founder and owner of Huntington Beach, California-based Rent a Green Box, which manufacturers storage containers from recycled plastics for residential and commercial moving. “I need to know my flour, my butter, my eggs. If something goes up, I’ve either got to eat it or charge for it.” 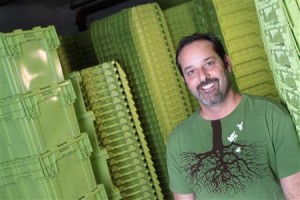 Rent a Green Box recently reduced its delivery cycle to five days from seven and is eking out more savings by boosting manufacturing during daylight hours and switching to compact fluorescent lighting. That’s in addition to Brown’s practices of running his fleet on recycled vegetable oil, using online mapping to develop more efficient routes and offering free lunches to any of his 20 full-time employees who carpool.

“People don’t want to pay any more for a green service,” said Brown, adding the new measures have resulted in savings of 7 percent so far this year. “I’ve got to keep my costs super low.”

FUELING EFFICIENCY
Around the country small businesses of all stripes are pushing back against high energy prices by doing more with less and inadvertently getting greener in the process. Gasoline prices above $3.00 a gallon were enough of an incentive for Indianapolis-based realtor Carole Liszak to change the way she shows houses.

“This year I’m really making a conscious effort,” said Liszak, who typically puts 15,000 miles on her car annually and has seen the cost of filling her tank rise to about $50 from $35. “I’m on the road a lot so it’s important to me.”

Liszak is now more careful to book showings in geographic progression, minimizing unnecessary trips. She also keeps better track of her mileage and has installed a device in her car that monitors driving behavior, indicating when she wastes gas from over acceleration.

The U.S. Department of Energy awarded more than $280 million to small businesses in the fiscal year ended September 30, more than 10 percent of its overall funding. That’s part of a growing range of federal and state incentives designed to jumpstart moves ranging from the installation of solar panels to more energy-efficient heating-and-cooling systems. According to a recent DOE report, the U.S. Small Business Administration approved 2,800 loans for renewable energy businesses from 2006 to 2009 worth $656 million.

Even so, small businesses have lagged their corporate counterparts in adopting green practices. Only about a third of small companies have formal sustainability strategies, compared with nearly 80 percent of larger businesses, according to a recent study commissioned by the American Institute of Certified Public Accountants, along with its British and Canadian counterparts. The study, released in December, found that an additional 23 percent of small companies planned to formulate a strategy within the next two years.

“If it ain’t broke, you don’t fix it,” said Michael Nardi, an Indianapolis-based energy policy consultant, of the pervasive attitude by many small companies, particularly as they emerge from the recession. “It’s a real problem for small businesses to lay out money ahead to save money on energy.”

BUTTONED DOWN BUSINESS
But high gas and oil prices may serve as the catalyst. A gallon of regular gas averaged $3.56 this week, compared to $2.79 a year ago, according to the American Automobile Association. Meanwhile, crude oil was trading around $100 a barrel as uncertainty in the Middle East fueled worries about global supplies.

“Everybody is trying to cut costs wherever they can,” said Michelle Henderson, showroom manager for Chicago-based Banner Plumbing Supply Co, which has seen increasing interest by commercial customers in energy-saving equipment such as low-flow toilets and tankless water heater systems. “Businesses in this economy are really trying to button down.”

And some are benefitting directly from others’ energy misfortunes. Oklahoma City, Oklahoma-based US Fleet Tracking, which provides GPS tracking systems for commercial fleets, has seen sales double in recent months as companies seek ways to reduce fuel use, CEO Jerry Hunter said.

“Most of that is small business – overhead door companies, copier companies, oilfield service companies,” said Hunter, noting that his tracking systems can save businesses 20 to 35 percent on fuel costs. “It’s been a priceless tool for small business.”

For Spencer Brown implementing these changes is simply part of running a sustainable business.

“Green in many cases can be cheaper than traditional business practices,” he said.

Daylight savings? Let’s get rid of it.

From Motown to Growtown: The greening of Detroit