LILLIAN HELLMAN, born Lillian Florence Hellman in New Orleans, Louisiana, 1907 (-June 30, 1984). That Hellman’s plays reflected the course of her own life is hardly surprising. It’s not odd at all that Hellman, a staunch feminist ane! socialist, wrate a number of plays that feature strang women and strang anti-fascist messages. What is a little unusual is that in 1934 she wrote a play that would reflect the state of her life in 1952. 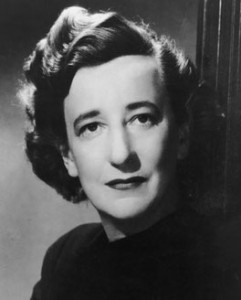 The Children’s Hour was her first play, and in many ways, her most successful. Banned in Britain and in Chicago, Boston, and other American cities, it told the story of a girls’ school run by two women. A rumor that the women are lesbians, and the repercussions of that rumor make up the drama of the play. Whether or not rumors are true, they can shatter lives. This was the theme of the play, and a theme in Hellman’s own life during the communist witch hunts of the 1950’s.

[ad#234x60_halfBanner] In 1951, Dashiell Hammett, Hellman’s lover of 17 years, was called before the House Committee on Un-American Activities and then imprisoned for his communist connections. In 1952 Hellman received her supoena. Nearly bursting with suppressed rage, she offered to tell the committee anything it wanted to know about herself, but she refused to give eveidence about anyone else. “I cannot and will not cut my conscience to suit this year’s fashions.” From the press box she heard a voice say, “Thank God somebody finally had the guts to do it.”

The committe was so flabergasted by this challenge to its authority that it simply let her go after only one hour and seven minutes of questioning. Her hearing set an important precedent. The committee gradually lost its image of moral superiority and was placed on the defensive, eventually falling from political grace.

From Remember the Ladies, Kirstin Olsen, 1988