[ad#125x125_legal] The name Moll Cutpurse was a pun: Moll, apart from being a nickname for Mary, was a common name for a young woman — usually of disreputable character. Cutpurse denoted her reputation as a thief who would cut purses to steal the contents. The other name by which she was known, “The Roaring Girl” is taken from roaring boys. The roaring boys were young gentlemen who caroused in taverns, and then picked brawls on the street for entertainment. 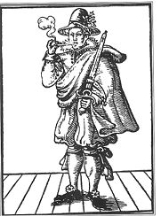 The facts of her life are extremely confusing, with many exaggerations and myths attached to her name. The Life of Mrs Mary Frith, a sensationalised biography written in 1662, three years after her death, helped to perpetuate many of these myths.

Born in the mid-1580s to a shoemaker and a housewife, Mary presented herself in public in a doublet and baggy breeches, smoking a pipe and swearing if she felt like it. It is believed that she first came to prominence in 1600 when she was indicted in Middlesex for stealing 2s 11d on the 26 August of that year. It is at that point she began to gain notoriety. In the following years, two plays were written about her. First the 1610 drama The Madde Pranckes of Mery Mall of the Bankside by John Day, the text of which is now lost. Another play (that has survived) came a year later by Thomas Middleton and Thomas Dekker, The Roaring Girl. Both works dwelt on her scandalous behaviour, especially that of dressing in men’s attire and did not show her in an especially favourable light, though the surviving play is fairly complimentary to her by contemporary standards.

[ad#125x125_legal]However, Mary seems to have been given a fair amount of freedom in a society that so frowned upon women who acted unconventionally. In 1611 Frith even performed (in men’s clothing, as always) at the Fortune Theatre. On stage she bantered with the audience and sang songs while playing the lute. It can be assumed that the banter and song were somewhat obscene, but by merely performing in public at all she was defying convention.

Such public actions led to some reprisal. Frith was arrested for being dressed indecently on 25 December 1611 and accused of being involved in prostitution. On 9 February 1612 Mary was required to do a penance for her “evil living” at St. Paul’s Cross. She put on a performance then, according to a letter by John Chamberland to Dudley Carlton. In his letter, Chamberland observes, “She wept bitterly and seemed very pentinent, but it is since doubted she was maudlin drunk, being discovered to have tippled of three-quarters of sack”.

She married Lewknor Markham (possibly the son of playwright Gervase Markham) on 23 March 1614. It has been alleged that the marriage was little more than a clever charade. Evidence shows that the whole thing was contracted to give Frith a counter when suits against her referred to her as a “spinster”.

By the 1620s she was, according to her own account, working as a fence and a pimp. She not only procured young women for men, but also respectable male lovers for middle-class wives. In one case where a wife confessed on her deathbed infidelity with lovers that Mary provided, Mary supposedly convinced the woman’s lovers to send money for the maintenance of the children that were probably theirs. It is important to note that, at the time, women who dressed in men’s attire on a regular basis were generally considered to be “sexually riotous and uncontrolled”, but Mary herself claimed to be uninterested in sex.[ad#120x240_bnose]

She is recorded as being released on 21 June 1644 from Bethlem Hospital after being cured of insanity. Which may or not be related to the (possibly apocryphal) story that she robbed General Fairfax and shot him in the arm during the Civil War. It was said that to escape the gallows she paid a 2,000 pound bribe.