Reposted from Grist
This post follows up on David Roberts’ series on “great places.”

I found out yesterday that one of my neighbors, a lady in her 70s, had been taken to the hospital with heart problems. Her middle-aged daughter, who lives with her, was the one who told me, when we met on the stretch of sidewalk between our two houses. We often stop to chat like this, trading news and gossip and small talk.

I expressed my concern and asked if there was anything that I could do. The daughter thanked me, and said she would pass along my well-wishes. Later, I found out from another neighbor that the older woman is going to be just fine. Phew.

So what does this have to do with the “great places” idea David Roberts began exploring a few weeks back? Here’s what: Great places have to be sustainable not just environmentally, but socially, too. Because human beings are social animals. 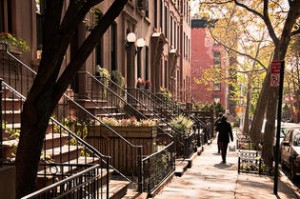 A street not far from where I live, designed for humans—not cars. Photo: Steve Minor

Those brief talks I had with my neighbors were typical—among dozens of similar interactions I have every week on my block and the streets around it. My dense, walkable, transit-rich neighborhood does a lot of great things for my carbon footprint (no car required, Zipcar within walking distance if I need one, farmers market only a few blocks away). But what it does for my soul might, in the end, be more important.

Over the years, I have traded dog-sitting services with one neighbor. A store around the corner has accepted packages for me when I’ve been out. I’ve gotten, and given, career advice while sitting on the stoop. I’ve dropped my wallet on the sidewalk and had it returned by a woman whom I know could have used the money inside. She didn’t touch the cash.

My son has ridden his scooter up and down the sidewalk, and we’ve played stickball with the neighbor kids in the street. I’ve shoveled the snow in front of the house of the old couple next door. I’ve given hugs, picked up trash, and offered my shoulder to cry on.

The street I live on is not just an address for me. It is an extension of my home.

That sense I have—that my living room extends into the street—is, sadly, a privilege in this day and age. It’s made possible by relatively low car traffic and high density of dwelling units on my block. This combination opens up a way of life that used to be common—in which human beings naturally connect with each other over time, forming networks that can then be called upon when the going gets rough.

Back in the late 1960s, a man named Donald Appleyard did some groundbreaking research into the way that car traffic kills street life and degrades the quality of urban communities. It was published in a book called Livable Streets, which will be back in print next year. He found that on streets with light car traffic, people felt more connected to their neighbors and their physical surroundings. The heavier the traffic, the more those connections suffered. The more the people suffered.

The video below, from Streetfilms, is an excellent illustration of his work.

Since Appleyard did his research in San Francisco, automobiles have only grown more dominant on our streets. Recently, a British graduate student named Joshua Hart set out to replicate Appleyard’s findings, and the quotes from his dissertation dramatize the toll autocentrism takes on human lives. Here’s what one man in his 50s said about the street where he lives:

[The traffic is] like a mountain range, cutting you off from the other side of the road…..it’s hellishly busy….a bloody nightmare. The buses and lorries shake the house when they come by. The air pollution can be quite bad out the front, sometimes during rush hour you feel the air getting thicker and thicker…..

Other recent studies have found that “social capital”—that is, the number and quality of human interactions—is higher in walkable communities. And even small increases in connectedness and activity can have significant health benefits.

Take a look at the video below as well, from Mike Biddulph of Cardiff University. It compares two different streets in Cardiff, Wales, at the same time of day. One is what is known in the U.K. as a “home zone”—a street that is designed with people as its primary focus, not cars. The other is a street with some traffic-calming measures in place, but where automobiles still dominate the streetscape visually and in terms of the space they occupy.

It becomes clear very quickly which street makes it inviting for people—especially children—to come out of their homes and do what primates generally like to do, which is to socialize with one another.

The concept of walkable, or livable, streets has slowly but surely been coming back into the mainstream conversation, in part because of the work of grassroots activists like Dan Burden. Burden has worked many hours (and walked many miles) to try to convince municipal officials that they should design their cities and towns for people instead of cars. People are taking notice. Streets are changing. More and more communities are passing “complete streets” legislation that requires streets to be designed with pedestrians and bikes in mind, not just cars. It shouldn’t just be 19th-century neighborhoods like mine that have a happy street life. It shouldn’t just be rich neighborhoods. It should be all neighborhoods.

But there are still way too many places in America where streets are for cars, and you take your life into your hands just trying to cross on foot. Changing our streets to bring them back to human scale will take generations. It’s a process, but at least the work has begun in earnest.

Here’s what Donald Appleyard said about the tension over street design:

People have always lived on streets. They have been the places where children first learned about the world, where neighbors met, the social centers of towns and cities, the rallying points for revolts, the scenes of repression…. The street has always been the scene of this conflict, between living and access, between resident and traveler, between street life and the threat of death.

Appleyard would likely be thrilled to see how his ideas are being taken up by a new generation. Sadly, he’s not around to do so. He was struck by a car and killed in 1982.

This is just great fun!

You are great! You are awesome!