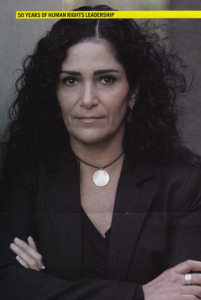 Mexican journalist and human rights defender Lydia Cacho has made powerfuI enemies in her fight to protect the rights of women and children. Cacho, the subject of several Amnesty International Urgent Action appeals, has focused her investigative reporting on gender violence in Mexico.

Her 2005 book, The Demons of Eden, exposed elite business leaders involved in a chiId sex-trafficking ring with the complicity of government officials-and provoked retaliation by her enemies, including her kidnapping, torture, and arrest. She was released following an immediate international outcry, including a global AI Urgent Action, and later cleared of charges. She continues her investigative work whiIe directing the crisis center and shelter she founded for victims of sex crimes and trafficking.

I think that some people really underestimate the power of organizations like Amnesty International. We started sending emails to Amnesty International, and when the members started sending all those letters, they put a lot of pressure on the government. Certain people within the government—those who are honest people, who believe in their job—used these letters as tools to protect us.

I remember one day [at the shelter] we were just so tired of the death threats, so tired of the stress. We had given, in just one year, 33,000 different attentions to women and children. We were so tired, with such burn-out. One day we were having a general meeting, and my voice kept breaking down.

I just started crying, and I said, “Listen, we have to cry, this is too hard. We will keep going, but I have to show you something.” I got this thing that one of my colleagues had put together-she had collected all the letters from Amnesty International members. I got them out and I started showing them. We saw Japanese, English, German, Italian. We cried together for an hour.

I told them, “This is it—we are working, protected by the entire world. People who don’t know us personally care and think this is important. If the government doesn’t care, if the local people in Cancun don’t care, we should concentrate on the power of what we are doing. This is a mission of life, this is not a job. And if we believe in our mission, we have to know that other people believe in it too.”

We still keep all those letters. They are so important to us, because each letter is a human being that is supporting us. It is not only support that is political, and moral, but it is emotional support. It lets you know that you matter in the world, that what you do is changing the world. What they do by sending the letters makes the world smaller.
In 2004, one little girl escaped from a sex-trafficking network. The owner of a five-star hotel was doing child pornography and sex tourism with kids from 4 years old to 13 years old. The little girl looked for me because she saw a TV program I did. I went to see her one night, and I talked to her. Then I started investigating the sex-trafficking network.

Once I had all the information, I understood that there were high-ranking politicians, even governors, involved in the sex-ring operation, and, obviously, foreigners and tourists. This guy was cutting deals in his hotel and using these kids for sexual purposes. He was taping everyone so he could have them in his pocket if they ever tried to do anything against him.

He knew even before I told anyone that I was investigating. He called me at my office and said, “If you keep going, I’m going to kill you.” I knew then that I had to publish a book, and I also knew we had to save all the other kids. We started rescuing the other kids, and we took them into the shelter. It was a hard time for everyone on the team be- cause we were on red-code security alert for months and months—everyone was threatening our shelter.

One day I was getting to my office. Back then, thanks to Amnesty International and other organizations that put a lot of pressure on the government, I had three federal agents and an armored car to protect me. I arrived at the office and my federal agents were arriving from breakfast, so I was driving myself in my car. All of the sudden, I saw a car on one side of the street and another one there, and I knew something was wrong. A gunman came out, and I thought they were going to kill me. He put a gun to my back and he said, ‘Don’t call your guards.’

My team was watching on video. They immediately started calling everyone we had on a list we had made a long time ago. My kidnappers put me in the car and drove me away for 20 hours, on a highway to go to another state, and they tortured me for 20 hours. The orders they had were to kill me if I didn’t agree to go to Puebla—the state where one of these mafia leaders live—and say that the contents of my book were lies. [ad#234x60_halfBanner]

I kept refusing. They stopped in the middle of the night, and they took me to the ocean and said, “You like the ocean, you like to swim.” They kept talking about my family, my husband, everyone in my family. They kept pulling my hair and holding me next to the ocean, in the dark.

All I could think of was the girls. Here you have a little girl who was abused and raped systematically by many powerful men—and she did not tell me for any other reason but to save other girls from these guys. That was the biggest lesson of my life. I was just in peace. I don’t know what happened to all the fear I felt before. “This is it, if they kill me in another way, I’m not going to take back anything,” I thought to myself. If I did that I would betray the girls: their pain, their past, and their future.

[ad#125x125_legal]All of the sudden the cell phone of one of them rang. He just looked at the guy, and he said “Change of plans, we going in the car.” They took me back in the car, and I was so happy. I didn’t know what the hell was going on, but I knew something happened. They were really angry, and I liked that, because I understood someone moved something.

I was on trial for a year for defamation. Five of my lawyers had to go, some of them because they had received death threats, and one of them because he sold himself to the mobsters. Finally I ended up with good lawyers, and I won the case one year after that.

I am waiting for the moment in which I can work with other people—not only women, but men and children—to help them understand that achieving their human rights is not a privilege, but a right. In order to do that I defend my rights, I protect my health, I enjoy my life, and I don’t ever let the bad guys take my happiness and my freedom away from me. The mobsters and the corrupt government officials feed off our fear. I wake up every day and say, “Today, I won’t feed them with my fear.” I am a free woman, and I will keep going. I dance salsa, I have some tequila, I enjoy life. I am not a martyr for human rights—I am an activist and a believer in human rights.