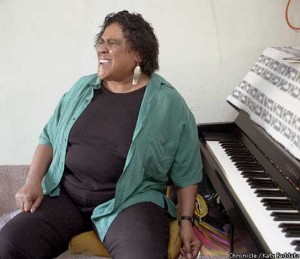 Photo by Katy Raddatz–The Chronicle Gwen Avery, blues singer. At home working on songs in her garage/studio. She turns away from the keyboard for a minute to belt out the tune. Photo: KATY RADDATZ

Gwen Avery, singer/songwriter/musician, has died at the age of 71. Avery was best known for her composition “Sugar Mama”, which was featured on Olivia Records’ groundbreaking collection, Lesbian Concentrate, in 1977. Originally slated to release a solo album on Olivia, she toured with her labelmates Linda Tillery and Mary Watkins on the Varied Voices of Black Women Tour, which also featured poet Pat Parker and Vicki Randle providing supporting vocals and percussion.

Avery stood apart in the Women’s Music Movement: a woman of color who understood the connection between her grandmother’s juke joint and the women’s music movement that Olivia Records was at the center of. Avery was quoted as saying “I dressed differently. I would wear satin suits and platform shoes with an afro with neckties and beautiful silk shirts. They were wearing plaid shirts and blue jeans.“ In an interview with the San Francisco Gate in 2002, she maintained that “the same issues of race and classism that confounded the early feminist and gay rights movements also infected the women’s music scene. I’ve always felt like a warrior or soldier. I’ve learned to deal with separation, isolation in the crowd, rejection in the abandonment.”
Her solo album never came to be via Olivia Records, but she continued to work on the road until her debut solo album, Sugar Mama, was released independently in 2001.

She spent the last decade of her life performing in the Bay Area’s Russian River region, bridging the gap between the blues and gospel, continuing to thrill audiences with her distinct interpretation of the rich heritage of black music. She performed numerous times at June Millington’s Institute for the Musical Art as well. Millington recalls “Gwen used to come to IMA to hang and rest her weary bones. We’d laugh—a lot! Then we’d jam and she’d let me play bass. She’d look at me and say ‘Wow! You can really play this!’ I didn’t even hear the blues until I was 19 or so, certainly not growing up in the Phillipines, but somewhere we met and knew without words. It was strong and true.”

Grammy nominated singer/songwriter/producer Linda Tillery reflects:
Gwen Avery was an authentic blues and gospel singer. She was raised in a juke joint, where from an early age, she heard first hand, the sounds of Black Troubadors weaving tales of love, passion, frustration and pleas to God – any god, for release from Jim Crow, segregation and the horrible legacy of racism in America.

Lesbian yes, Black woman yes, real deal soulful singer, yes. Yet I wonder how many people really understood her gift? You would have had to listen to Bessie Smith, Ma Rainey and Mahalia to recognize the “time stamp” that marked her unique style. She became the “Sugar Mama” of Women’s Music, no longer a prisoner of love denied but a champion of love out in the open – raw and unashamed. That was her gift to us all.

Jazz vocalist Rhiannon describes her as “a tough, fragile woman..an open book in a way, with such tender passion for music and life. Vulnerable, flawed, capable of singing all that complex, powerful feeling. Not easy for her, and what she gave us was unique.”