Angelina Emily Grimké Weld (February 20, 1805 – October 26, 1879) was an American political activist, abolitionist, women’s rights advocate, and supporter of the women’s suffrage movement. While she was raised a southerner, she spent her entire adult life living in the North. The years of her greatest fame were between 1836, when a letter she sent to William Lloyd Garrison was published in his anti-slavery newspaper, The Liberator, and May 1838, when she gave a courageous and brilliant speech to abolitionists gathered in Philadelphia, with a hostile crowd throwing stones and shouting just outside the hall. The essays and speeches she produced in that two-year period were incisive arguments to end slavery and advance women’s rights. 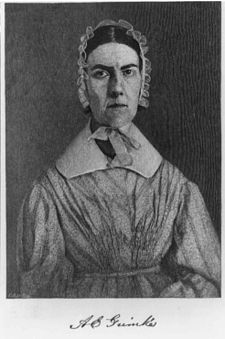 Drawing her views from natural rights theory (famously set forth in the Declaration of Independence), the Constitution, and from Christian beliefs in the Bible, as well has her own experience of slavery and racism in the South, she argued for the injustice of denying freedom to any man or woman, and was particularly eloquent on the problem of racial prejudice. When challenged for speaking in public to mixed audiences of men and women in 1837, she, joined by her sister Sarah, fiercely defended women’s right to make speeches and more generally be fully political beings.

Grimké married Theodore Weld, a prominent abolitionist himself, in May 1838. They lived in New Jersey, with her sister Sarah Grimke, and raised three children, and supported themselves by running two schools, the later located in the Raritan Bay Union utopian community. After the Civil War ended, the Grimke-Weld household moved to Hyde Park, Massachusetts, where they spent their last years. Angelina and Sarah were active in the Massachusetts Woman Suffrage Association in the 1870s. [Wikipedia]

An Appeal to the Christian Women of the South (1836)
An Appeal to the Christian Women of the South, published by the American Anti-Slavery Society, is unique because it is the only written appeal made by a Southern woman to other Southern women regarding the abolition of slavery, and written in the hopes that Southern women would not be able to resist an appeal made by one of their own. The style of the essay is very personal in nature and uses simple language and firm assertions to convey her ideas. Grimké’s Appeal was widely distributed by the American Anti-Slavery Society, and was received with great acclaim by radical abolitionists. However, it was also received with great criticism by her former Quaker community and was publicly burned in South Carolina.

In this way, and as a devout believer, Grimké uses the beliefs of Christian religion to attack the idea of slavery:

“Did not Jesus condemn slavery? Let us examine some of his precepts. “Whatsoever ye would that men should do to you, do ye even so to them”, Let every slaveholder apply these queries to his own heart; Am I willing to be a slave —Am I willing to see my wife the slave of another — Am I willing to see my mother a slave, or my father, my sister or my brother? If not, then in holding others as slaves, I am doing what I would not wish to be done to me or any relative I have; and thus have I broken this golden rule which was given me to walk by”.—Grimké, page 14