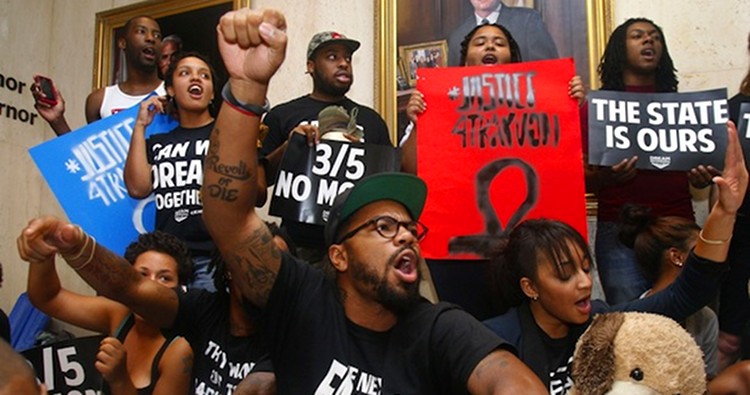 Members of Dream Defenders made their presence known at the Florida State of the State Address last week. After leading a month-long demonstration a year ago outside the governor’s office, they returned on opening day of the legislative session to protest. Youth gathered between the House and Senate chambers, about 100 strong. They demanded for an end to zero-tolerance policies in Florida schools and a change to Florida’s gun laws.

Dream Defenders is a student-run organization started in the wake of the Trayvon Martin case. Members of the group spent a month sleeping inside the Capitol last summer, after George Zimmerman was found not guilty of murdering Martin in a Seminole County case that drew national attention.

The organization is turning poignant moments into movements full of momentum. “We are really pissed off,” said Steven Pargett, Dream Defenders Communications Director. Members of Dream Defenders have joined together in order to fight against the systemic inequality in our justice system, impacting some of the most vulnerable members of our society, minority youth.

A group of friends were resolved to come up with a proactive response to incite change in the justice system. They first attacked the issue of stand your ground, the reason behind not arresting George Zimmerman for six weeks after he killed 17-year-old Martin.

“All of us are here and we are fighting for dignity and power everyone has the power to live their dreams,” Pargett said. They made the collective effort to end the vicious school-to-prison pipeline and stand your ground policy. Dream Defenders defines the school-to-prison pipeline, as the system of harsh discipline policies and increased presence of police in schools that push young people out of the classroom and into the criminal justice system. These practices include out-of-school suspensions, expulsions and school-based arrests, even for minor infractions like being late or violating a dress code. 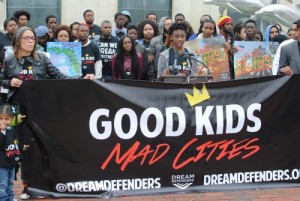 Cherokie Boyd is the Communications Director for the Broward College chapter of Dream Defenders in Davie South Florida. She said, “Dream Defenders blossomed into something everyone was angry about. You can access a situation, and think about what is causing it to happen.” Boyd became a part of Dream Defenders this past November when a friend approached her on campus and asked her for her signature to start a chapter at Broward.

To start the week Gov. Rick Scott’s address focused on creating economic growth in the state of Florida. There is a bucket list of promises which Scott has made. Scott addressed his investment in the Florida State education system. Here is an excerpt from his speech:

“They have their own dreams – and many of those dreams start with getting a great education. That’s why we are again proposing to invest record amounts in our K-12 education system. With your support, this budget will invest a total of $18.8 billion in education – the highest in Florida history. This record investment builds on our previous budgets, which invested an additional $1 billion in K-12 education for two years in a row. Almost 19 billion is budgeted for K-through-12 education, which he says is the highest in the state’s history,” Scott said.

However, Dream Defenders hopes to get to the nitty-gritty of the issues at hand, ending the school-to-prison pipeline and the stand your ground policy. The organization hopes to keep the government accountable.

According to Dream Defenders, the school-to-prison pipeline failing zero-tolerance policies lead to high dropout rates, lower academic achievement and kids get pushed onto a prison pathway. The effects of arrests can be severe and long-lasting, following young people when applying for college or a job.

There is no evidence that extreme school discipline makes schools safer or improves student behavior. On the contrary, research suggests that the overuse of suspensions and expulsions increases the likelihood of later criminal misconduct. Over the next few years the organization hopes to expand beyond the state of Florida. “I hope that Dreams will be able to build a foundation for what winning looks like,” Pargett said.

“We are the sons and daughters of slaves and farm-workers.
We are Dreamers and the products of a generation that had a Dream.
We are ‘We Shall Overcome’ and ‘Si se puede!’
We are Phoenix and Selma, the Freedom Rides & the Trail of Dreams, Suffrage & Solidarity.

We are products of a dream deferred.
We are witnesses to a dream damaged and destroyed.
We are Florida and Alabama.
We are diverse: students, alumni, black, brown, and white, young and old.
We are dedicated to defending the dream etched in our memories by Dr. Martin Luther King:
that we are all created equal and possess equal rights to life, liberty, and the pursuit of happiness.”
– Dream Defenders

Priscilla Ward is a DC native and microwaved New Yorker. She enjoys keeping an active pulse on the arts, entertainment and cultural scenes of DC, New York and Philadelphia. She also freelances for Brooklyn Exposed and MadameNoire.com. She aspires to one day have her own cartoon. You can follow her on Twitter and Instagram @Macaronifro

What does Dr. King’s DREAM mean to you?