Some of the smartest action on climate is taking place in a metropolis near you.
from OneEarth, a magazine of the Natural Resources Defense Council

Forget about stalled international treaties and congressional gridlock. Real solutions to climate change are making a difference—right now—in our cities. 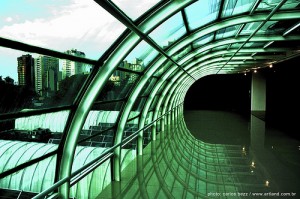 Together, mayors, city planners, and entrepreneurs are cutting energy use and lowering carbon emissions in myriad ways: more bike paths, mass transit, renewable power. Why do local solutions to a global problem matter so much? Because the world’s urban population, for the first time in history, surpassed its nonurban population. Today nearly 54 percent of all human beings—more than 3.8 billion people—live in a metropolitan area. Collectively, these urban centers account for more than 70 percent of global greenhouse gas emissions and for two-thirds of the world’s energy use. As cities go, so goes the planet.

In U.S. cities, climate solutions represent a clear path around paralyzing ideological divides. The urban imperative isn’t about politics; it’s about action, on the ground, in real time, where the majority of us live, work, and raise families. Will the trains work, or will storm damage suspend service for a year? Do the sewers function or overflow after a downpour? Is the air safe for our children to breathe as they play outside or cause for another visit to the ER?

To see the most promising climate strategies, take a trip with us to Houston, where sustainable policies in the U.S. petrochemical capital appear to be winning the day. Meet us in Carmel, the once-sleepy Indianapolis suburb whose Republican mayor has won reelection four times on a platform emphasizing green space and walkable communities. From New York to Rotterdam to a supercity—Tomorrowland—not yet on the map, the urban leaders featured in this debut issue of onEarth are turning the old adage inside out: By thinking locally, they’re acting globally.