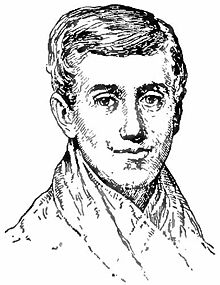 Prudence Crandall (September 3, 1803 – January 28, 1890), a schoolteacher raised as a Quaker, stirred controversy with her education of African-American girls in Canterbury, Connecticut. Her private school, opened in the fall of 1831, was boycotted when she admitted a 17-year-old African-American female student in the autumn of 1833, resulting in what is widely regarded as the first integrated classroom in the United States.

She is Connecticut’s official State Heroine.

Public backlash
Citizens of Canterbury at first protested the school and then held town meetings “to devise and adopt such measures as would effectually avert the nuisance, or speedily abate it…” Unable to shake Crandall’s spirit, the town response escalated into warnings, threats, and acts of violence against the school. Crandall was faced with great local opposition, and her detractors had no plans to back down.

On May 24, 1833, the Connecticut legislature passed the “Black Law”, which prohibited a school with African American students from outside the state without the town’s permission. In July, Crandall was arrested and placed in the county jail for one night and then released under bond to await her trials. 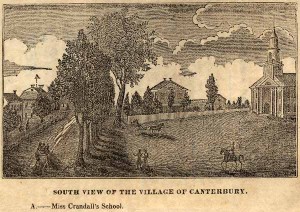 Under the Black Law, the townspeople refused any amenities to the students or Crandall, closing their shops and meeting houses to them. Stage drivers also refused to provide them with transportation, and even the town doctors would not attend to their needs. To make matters worse, the townspeople also poisoned the school’s well—its only water source—with animal feces and then prevented Crandall from obtaining any water from other sources. It was difficult for Crandall to run her school, but she continued to teach the young women, angering the community even further.

Crandall’s students also suffered. One 17-year-old student, Anna Eliza Hammond, was even arrested; however, with the help of local abolitionist Samuel J. May, she was able to post bail bond through collections and donations of $10,000.

Mr. May, we are not merely opposed to the establishment of that school in Canterbury; we mean there shall not be such a school set up anywhere in our State. The colored people can never rise from their menial condition in our country; they ought not to be permitted to rise here. They are an inferior race of beings, and never call or ought to be recognized as the equals of the whites.

Judicial proceedings
A prominent abolitionist, Arthur Tappan of New York, donated $10,000 to hire the ablest lawyers to defend Crandall throughout her trials, the first of which opened at the Windham County Court on August 23, 1833. The constitutionality of the Connecticut law regarding the education of African Americans was the driving issue of the cases.

The defense argued that African Americans were citizens in other states, so therefore there was no reason why they should not be considered as such in Connecticut. Thus, they focused on the deprivation of their rights under the United States Constitution. In contrast, the prosecution denied the fact that freed African-Americans were citizens in any state, and the county court jury ultimately failed to reach a decision for the cases.

Although a second trial in Superior Court decided against the school, the case was taken to the Supreme Court of Errors on appeal in July 1834. At the conclusion of this appeal, the Supreme Court of Connecticut reversed the decision of the lower court, dismissing the case on July 22 on the grounds of a lack of evidence.

The judicial process had not stopped the operation of the Canterbury school, but the townspeople’s violence against it increased. The windows were smashed with heavy iron bars as the vandalism continued. The public was so angry at the dismissal of the case that on September 9, the school was set on fire. For the safety of her students, her family and herself, Prudence Crandall decided to close her school on September 10, 1834.

In Enfield, Connecticut, there is the namesake Prudence Crandall Elementary School. Her husband Calvin Philleo, or a family member with a similar name, is interred at Old Center Cemetery in Suffield, Connecticut, also in Hartford County.

In 1995, the Connecticut General Assembly designated Prudence Crandall as the state’s official heroine, and in 2009 a statue of Crandall and a pupil was installed in the state capital. Kansas erected an interstate highway marker to honor Crandall (which also noted her Connecticut litigation as a precursor to the landmark U.S. Supreme Court case Brown v Board of Education which involved the school district of Topeka several counties to the northeast). She was also the subject of a movie entitled She Stood Alone.