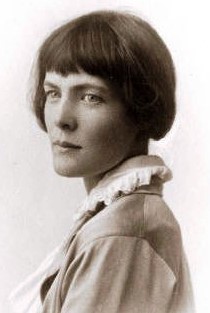 Hilda “H.D.” Doolittle (September 10, 1886 – September 27, 1961) was an American poet, novelist, and memoirist known for her association with the early 20th century avant-garde Imagist group of poets such as Ezra Pound and Richard Aldington. She published under the pen name of H.D..

H.D. was born in Bethlehem, Pennsylvania, in 1886 and moved to London in 1911, where her publications earned her a central role within the then emerging Imagist movement. A charismatic figure, she was championed by the modernist poet Ezra Pound, who was instrumental in building and furthering her career. From 1916–17, she acted as the literary editor of the Egoist journal, while her poetry appeared in the English Review and the Transatlantic Review. During the First World War, H.D. suffered the death of her brother and the breakup of her marriage to the poet Richard Aldington, and these events weighed heavily on her later poetry. Glenn Hughes, an authority on Imagism, wrote that ‘her loneliness cries out from her poems.’ She had a deep interest in Ancient Greek literature, and her poetry often borrowed from Greek mythology and classical poets. Her work is noted for its incorporation of natural scenes and objects, which are often used to emote a particular feeling or mood.

She befriended Sigmund Freud during the 1930s, and became his patient in order to understand and express her bisexuality. H.D. married once, and undertook a number of relationships with both men and women. She was unapologetic about her sexuality, and thus became an icon for both the gay rights and feminist movements when her poems, plays, letters and essays were rediscovered during the 1970s and 1980s.

The World War I years proved particularly traumatic for H.D.; she had a miscarriage, Adlington was drafted, her marriage fell apart, her older bother was killed in the war, her father died, and she was stricken with double pneumonia. She gave birth to a daughter, Perdita, and left Adlington, although she remained married until 1938. It was a this point she met the woman who she said “Saved” her—Winifred Ellerman, who called herself Bryher, and whose friendship with H.D. Is outlined in the entry for September 2. In her busy lifetime, H.D. Was psychoanalyzed by Freud, wrote books about everyone she knew, suffered another nervous breakdown, and fell in love with an R.A.F. Commander and a Haitian journalist. (Remember the Ladies, Kirstin Olsen, 1988, p 155.)