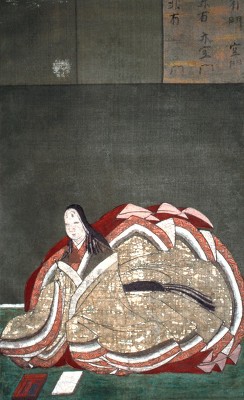 Murasaki Shikibu (c. 973 or 978 – c. 1014 or 1031) was a Japanese novelist, poet and lady-in-waiting at the Imperial court during the Heian period. She is best known as the author of The Tale of Genji, written in Japanese between about 1000 and 1012. Murasaki Shikibu is a nickname; her real name is unknown, but she may have been Fujiwara Takako, who was mentioned in a 1007 court diary as an imperial lady-in-waiting.

Heian women were traditionally excluded from learning Chinese, the written language of government, but Murasaki, raised in her erudite father’s household, showed a precocious aptitude for the Chinese classics and managed to acquire fluency. She married in her mid-to late twenties and gave birth to a daughter before her husband died, two years after they were married. It is uncertain when she began to write The Tale of Genji, but it was probably while she was married or shortly after she was widowed. In about 1005, Murasaki was invited to serve as a lady-in-waiting to Empress Sh?shi at the Imperial court, probably because of her reputation as a writer. She continued to write during her service, adding scenes from court life to her work. After five or six years, she left court and retired with Sh?shi to the Lake Biwa region. Scholars differ on the year of her death; although most agree on 1014, others have suggested she was alive in 1031.

Murasaki wrote The Diary of Lady Murasaki, a volume of poetry, and The Tale of Genji. Within a decade of its completion, Genji was distributed throughout the provinces; within a century it was recognized as a classic of Japanese literature and had become a subject of scholarly criticism. Early in the 20th century her work was translated; a six-volume English translation was completed in 1933. Scholars continue to recognize the importance of her work, which reflects Heian court society at its peak. Since the 13th century her works have been illustrated by Japanese artists and well-known ukiyo-e woodblock masters.