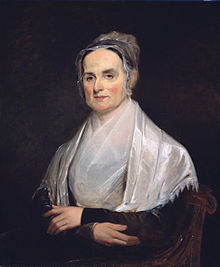 Lucretia Coffin Mott (January 3, 1793 – November 11, 1880) was an American Quaker, abolitionist, a women’s rights activist, and a social reformer. She helped write the Declaration of Sentiments during the 1848 Seneca Falls Convention.

When Congress passed the Fugitive Slave Law in 1850, mandating that an escaped slave was no longer safe upon reaching a free state and imposing penalties for those who helped runaways, Lucretia Mott was so outraged that she made her home a stop on the Underground Railroad. It was not her first act of defiance, nor was it her last. In 1840 she attended the World’s Anti-Slavery Convention in London, but she, along with every other woman there, was rejected as a delegate. Angry, but not discouraged, she spent her time during the convention befriending another rejected delegate, a young Elizabeth Cady Stanton. The two women discovered they had much in common and pledged to work together on behalf of their sex. Eight years later, they organized the world’s first women’s rights convention. (Remember the Ladies, Kirstin Olsen)