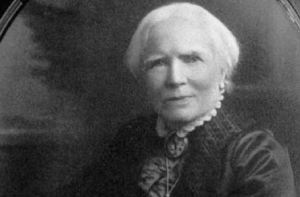 His involvement with abolitionism led to a friendship with William Lloyd Garrison.

Samuel Blackwell’s business ventures did not do well. He moved the family from New York to Jersey City and then to Cincinnati. Samuel died in Cincinnati, leaving the family without financial resources.

Elizabeth Blackwell, her two older sisters Anna and Marian, and their mother opened a private school in Cincinnati to support the family. Younger sister Emily Blackwell became a teacher in the school. Elizabeth became interested, after initial repulsion, in the topic of medicine and particularly in the idea of becoming a woman physician, to meet the needs of women who would prefer to consult with a woman about health problems.

Her family religious and social radicalism was probably also an influence on her decision. Elizabeth Blackwell said much later that she was also seeking a “barrier” to matrimony.

Elizabeth Blackwell went to Henderson, Kentucky, as a teacher, and then to North and South Carolina, where she taught school while reading medicine privately. She said later, “The idea of winning a doctor’s degree gradually assumed the aspect of a great moral struggle, and the moral fight possessed immense attraction for me.” And so in 1847 she began searching for a medical school that would admit her for a full course of study.

Elizabeth Blackwell was rejected by all the leading schools to which she applied, and almost all the other schools as well. When her application arrived at Geneva Medical College at Geneva, New York, the administration asked the students to decide whether to admit her or not. The students, reportedly believing it to be only a practical joke, endorsed her admission.

When they discovered that she was serious, both students and townspeople were horrified. She had few allies and was an outcast in Geneva. At first, she was even kept from classroom medical demonstrations, as inappropriate for a woman. Most students, however, became friendly, impressed by her ability and persistence.

Elizabeth Blackwell graduated first in her class in January, 1849, becoming thereby the first woman to graduate from medical school, the first woman doctor of medicine in the modern era.

She decided to pursue further study, and, after becoming a naturalized United States citizen, she left for England.

After a brief stay in England, Elizabeth Blackwell entered training at the midwives course at La Maternite in Paris. While there, she suffered a serious eye infection which left her blind in one eye, and she abandoned her plan to become a surgeon.

From Paris she returned to England, and worked at St. Bartholomew’s Hospital with Dr. James Paget. It was on this trip that she met and became friends with Florence Nightingale.

In 1851 Elizabeth Blackwell returned to New York, where hospitals and dispensaries uniformly refused her association. She was even refused lodging and office space by landlords when she sought to set up a private practice, and she had to purchase a house in which to begin her practice.

She began to see women and children in her home. As she developed her practice, she also wrote lectures on health, which she published in 1852 as The Laws of Life; with Special Reference to the Physical Education of Girls.

In 1853, Elizabeth Blackwell opened a dispensary in the slums of New York City. Later, she was joined at the dispensary by her sister Emily Blackwell, newly graduated with a medical degree, and by Dr. Marie Zakrzewska, an immigrant from Poland whom Elizabeth had encouraged in her medical education. A number of leading male physicians supported their clinic by acting as consulting physicians.

Having decided to avoid marriage, Elizabeth Blackwell nevertheless sought a family, and in 1854 adopted an orphan, Katharine Barry, known as Kitty. They remained companions into Elizabeth’s old age.

In 1857, the Blackwell sisters and Dr. Zakrzewska incorporated the dispensary as the New York Infirmary for Women and Children. Zakrzewska left after two years for Boston, but not before Elizabeth Blackwell went on a year-long lecture tour of Great Britain. While there, she became the first woman to have her name on the British medical register (January 1859). These lectures, and personal example, inspired several women to take up medicine as a profession.

When Elizabeth Blackwell returned to the United States in 1859, she resumed work with the Infirmary. During the Civil War, the Blackwell sisters helped to organize the Women’s Central Association of Relief, selecting and training nurses for service in the war. This venture helped to inspire the creation of the United States Sanitary Commission, and the Blackwells worked with this organization as well.

A few years after the end of the war, in November 1868, Elizabeth Blackwell carried out a plan that she’d developed in conjunction with Florence Nightingale in England: with her sister, Emily Blackwell, she opened the Women’s Medical College at the infirmary. She took the chair of hygiene herself.

This college was to operate for thirty-one years, but not under Elizabeth Blackwell’s direct guidance. She moved the next year to England. There, she helped to organize the National Health Society and she founded the London School of Medicine for Women.

An Episcopalian, then a Dissenter, then a Unitarian, Elizabeth Blackwell returned to the Episcopal church and became associated with Christian socialism.

In 1875, Elizabeth Blackwell was appointed professor of gynecology at the London School of Medicine for Children, founded by Elizabeth Garrett Anderson. She remained there until 1907 when she retired after a serious fall downstairs. She died in Sussex in 1910.