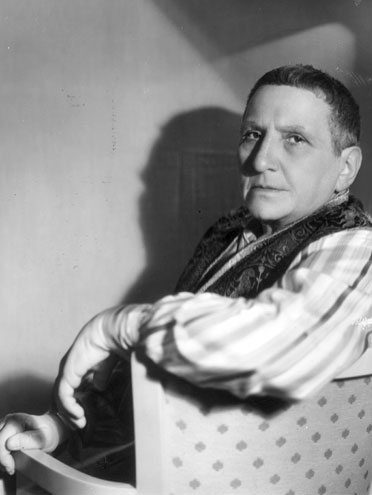 Gertrude Stein (February 3, 1874 – July 27, 1946) was an American writer and thinker who spent most of her life in France. She was well known for her writing, her art collection, and the many people (some of whom were, or became, famous) who visited her Paris salon.

Her adult life featured two main personal relationships. The first was her working relationship with her brother Leo Stein, from 1874 to 1914, and the second was her romantic relationship with Alice B. Toklas, from 1907 until Stein’s death in 1946. Stein shared her salon at 27 rue de Fleurus, Paris, first with Leo and then with Alice. Throughout her lifetime, Stein also had significant relationships with avant garde artists and literary people. She was friends with young artists Matisse and Picasso during the early 1900s, authors Thornton Wilder and Ernest Hemingway during the 1920s. She is credited with coining the term Lost Generation as description of her many expatriate acquaintances in France and Italy during the 1920s and 1930s. [Wikipedia]

The greats of the time were all there—Hemingway, Joyce, Fitzgerald, Gide, Valery and Pound—but above and apart from them all sat Stein, reigning over the expatriate circles like a fleshy deity. Sherwood Anderson called her a “strong woman with legs like stone pillars.” Ezra Pound called her “an old tub of guts.” Others were kinder. Sylvia Beach, who ran the notable Paris bookstore called Shakespeare & Company, said that Stein had “A delectable voice, mannish but velvety.”

Few people, at least in Paris, gave a damn about her lifestyle; it was her monstrous ego that disturbed them. Fortunately for Stein, the same egotism that drove people away from her convinced her that she was indeed a goddess in her own time, a living muse, and a woman of infinite genius. Having spent her childhood in Vienna, Paris and San Francisco, she attended Radcliffe, where she studied with William James, and also at John Hopkins. Her graduation was not to be, however, a complicated love affair with two other women led to her withdrawal in 1902. She traveled to Paris to join her brother Leo, where they started what was to become the greatest literary and artistic salon in that city.

To the distress of her critics, she was right. Picasso, Matisse, and Braque graced her home with their conversation and their paintings. In 1969 her art collection was valued at six million dollars. Literary figures of the day paid homage. The only holdout was James Joyce, whose rivalry with Stein became legendary and split the Parisian artists into two camps.

Stein elected to write in a deliberately experimental style. The dense and repetitive style confused and bewildered some and infuriated others. She was almost universally attacked, which only convinced her that she was ahead of her time. On one occasion, when asked why she didn’t write the way she talked, she asked, “Why don’t you read the way I write?”

Remaining in Paris through both world wars, she returned to the United States in 1946, and succumbed to cancer. As she lay dying, she asked the assembled around her, “What is the answer?” No one spoke. After a long pause, she tried again. “What is the question?’ [Remember the Ladies, Kirstin Olsen]