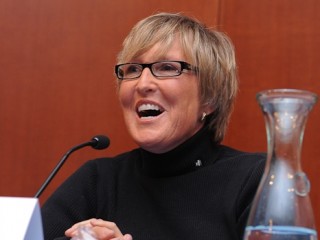 Jane Geddes (born February 5, 1960) is a retired American professional golfer. She became a member of the LPGA Tour in 1983 and won two major championships and 11 LPGA Tour events overall. Geddes was the Vice President of Talent Relations of the WWE.

Geddes was born in Huntington, New York. She played college golf at Florida State University and was a member of the school’s national championship team in 1981. She joined the LPGA Tour in 1983, posting runner-up finishes three times from 1984 to 1985.

Geddes broke through for her first professional victory when she won the 1986 U.S. Women’s Open by defeating Sally Little in an 18-hole playoff. Then she won again the very next week. The year 1987 was her best, as she posted five victories, including the Mazda LPGA Championship, and four second-place finishes, finishing third on the money list. In all, seven of Geddes’ 11 career wins came from 1986 to 1987.

Geddes won twice in 1991 and her last win was at the 1994 Chicago Challenge. Geddes finished in the Top 20 on the money list nine times, and posted 14 Top 10 finishes in majors in addition to her two major championship wins. In 2000, she was recognized during the LPGA’s 50th Anniversary in 2000 as one of the LPGA’s top-50 players and teachers. She retired from the LPGA Tour following the 2003 season.

Geddes co-founded an Internet e-commerce company named Planesia, which she sold in 2001. She received a degree in criminology from the University of South Florida in 2003, and later received a law degree from Stetson University College of Law in Florida. She also served as assistant captain of the U.S. Solheim Cup team in 2002 and 2003. In January 2007, she joined the LPGA Tour as Senior Director of Tournament Business Affairs. She was later promoted to Vice-President of Competition. In 2009, she was promoted again to Senior Vice President of Tournament Operations and Players Services.

In September 2011, Geddes left the LPGA to become VP of Talent Relations for World Wrestling Entertainment. On March 4, 2015 it was reported that Geddes had been released from the WWE. She currently resides near Stamford, Connecticut with her partner, former professional tennis player Gigi Fernández and their twins, Karson Xavier and Madison Jane.