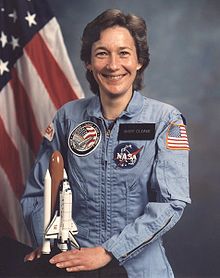 Mary Louise Cleave (born 5 February 1947) is an American engineer and a former NASA astronaut. She also served from 2004 to 2007 as NASA Associate Administrator for the Science Mission Directorate.

Cleave held graduate research, research phycologist, and research engineer assignments in the Ecology Center and the Utah Water Research Laboratory at Utah State University from September 1971 to June 1980. Her work included research on the productivity of the algal component of cold desert soil crusts in the Great Basin Desert south of Snowville, Utah; algal removal with intermittent sand filtration and prediction of minimum river flow necessary to maintain certain game fish; the effects of increased salinity and oil shale leachates on freshwater phytoplankton productivity; development of the Surface Impoundment Assessment document and computer program (FORTRAN) for current and future processing of data from surface impoundments in Utah; and design and implementation of an algal bioassay center and a workshop for bioassay techniques for the Intermountain West.

NASA career
Cleave was selected as an astronaut in May 1980. Her technical assignments have included: flight software verification in the Shuttle Avionics Integration Laboratory (SAIL); CAPCOM on five Space Shuttle flights; Malfunctions Procedures Book; Crew Equipment Design. A veteran of two space flights, Cleave logged a total of 10 days, 22 hours, 02 minutes, 24 seconds in space, orbited the Earth 172 times and traveled 3.94 million miles. She was a mission specialist on STS-61-B (November 26 to December 3, 1985) and STS-30 (May 4–8, 1989).

Cleave left JSC in May 1991 to join NASA’s Goddard Space Flight Center in Greenbelt, Maryland. She worked in the Laboratory for Hydrospheric Processes as the Project Manager for SeaWiFS (Sea-viewing, Wide-Field-of-view-Sensor), an ocean color sensor which is monitoring vegetation globally. Cleave served as Associate Administrator, Science Mission Directorate, NASA Headquarters, Washington, D.C.. She stepped down from that position in April, 2007 and was succeeded by Dr. Alan Stern.