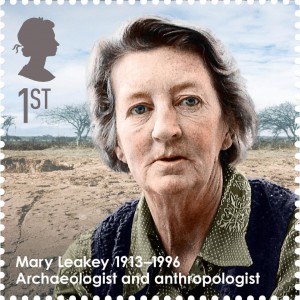 Mary Leakey (6 February 1913 – 9 December 1996) was a British paleoanthropologist who discovered the first fossilised Proconsul skull, an extinct ape now believed to be ancestral to humans. She also discovered the robust Zinjanthropus skull at Olduvai Gorge in Tanzania, eastern Africa. For much of her career she worked with her husband, Louis Leakey, at Olduvai Gorge, where they uncovered fossils of ancient hominines and the earliest hominins, as well as the stone tools produced by the latter group. Mary Leakey developed a system for classifying the stone tools found at Olduvai. She discovered the Laetoli footprints, and at the Laetoli site she discovered hominin fossils that were more than 3.75 million years old.

During her career, Leakey discovered fifteen new species of other animals, and one new genus.

In 1972, after the death of her husband, Leakey became director of excavations at Olduvai. She maintained the Leakey family tradition of palaeoanthropology by training her son, Richard, in the field.

Leakey had served her apprenticeship under Dorothy Liddell at Hembury, 1930–34. In 1934 she was part of a dig at Swanscombe where she discovered the largest elephant tooth in Britain known to that time.

The Leakeys’ most famous research, however, was at Olduvai Gorge in the Serengeti plains of northern Tanzania. The site yielded many stone tools, from Oldowan choppers to multi-purpose hand axes. The earliest tools were likely made by Homo habilis and date to over two million years ago.

On the morning of July 17, 1959, Louis felt ill at Olduvai and stayed at camp while Mary went out to the field. At some point she noticed a piece of bone that “seemed to be part of a skull” with a “hominid look”. After dusting topsoil away and finding “two large teeth set in the curve of a jaw,” she drove back to camp exclaiming “I’ve got him!” Active excavation began the following day and a partial cranium was unearthed within a few weeks, though it had to be reconstructed from fragments scattered in the scree. After examining the cranium, Louis Leakey concluded it was of a species ancestral to humans, but of an earlier group, the australopithecines. He eventually dubbed the find Zinjanthropus boisei, “East Africa man”—Zinj is an ancient Arabic word for the East African coast. The name was later revised to Paranthropus boisei, and by some to Australopithecus boisei; a consensus on classification is still in debate.

After her husband died in 1972, Mary Leakey continued their work at Olduvai and Laetoli. It was at the Laetoli site that she discovered hominin fossils that were more than 3.75 million years old.

From 1976 to 1981 Leakey and her staff uncovered the Laetoli hominin footprint trail which had been tracked through a layer of volcanic ash some 3.6 million years ago. The subsequent years were filled with research at Olduvai and Laetoli, and with follow-up work to discoveries and preparing publications.

In her career, Leakey discovered 15 new species of other animals, and one new genus. She was elected a Foreign Honorary Member of the American Academy of Arts and Sciences in 1979.

In April 2013 Leakey was honoured by Royal Mail in the UK, as one of six people selected as subjects for the “Great Britons” commemorative postage stamp issue. Google celebrated the 100th anniversary of Mary Leakey’s birth with its Google doodle for 6 February 2013.