Eliza Lynn Linton (1822-1898), was a British novelist, essayist, and journalist. The daughter of a clergyman and granddaughter of a bishop of Carlisle, she arrived in London in 1845 as the protégé of poet Walter Savage Landor. In the following year she produced her first novel, Azeth, the Egyptian; Amymone (1848), and Realities (1851), followed. None of these had any great success, and she became a journalist, joining the staff of the Morning Chronicle, and All the Year Round. 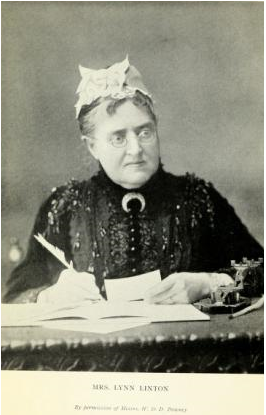 In 1858 she married W. J. Linton, an eminent wood-engraver, who was also a poet of some note, a writer upon his craft, and a Chartist agitator. In 1867 they separated in a friendly way, the husband going to America, and the wife returning to writing novels, in which she finally attained wide popularity. Her most successful works were The True History of Joshua Davidson (1872), Patricia Kemball (1874), and Christopher Kirkland.

She was also a severe critic of the “New Woman.” Her most famous essay on this subject, “The Girl of the Period,” was published in Saturday Review in 1868 and was a vehement attack on feminism. In 1891, she wrote “Wild Women as Politicians” which explained her opinion that politics was naturally the sphere of men, as was fame of any sort. “Amongst our most renowned women,” she wrote, “are some who say with their whole heart, “I would rather have been the wife of a great man, or the mother of a hero, than what I am, famous in my own person.” Mrs Linton is a leading example of the fact that the fight against votes for Women was not only organized by men.
Her obituary in The Times noted her “animosity towards all, or rather, some of those facets which may be conveniently called the ‘New Woman’,” but added that “it would perhaps be difficult to reduce Mrs. Lynn Linton’s views on what was and what was not desirable for her own sex to a logical and connected form.” [Wikipedia]

She had no children and separated from her irresponsible husband when he spent her money and interfered with her ability to write. Although she had many close female friends, she claimed to hate women “as a race,” and wrote her autobiography as The Autobiography of Christopher Kirkwood, changing herself into a male protagonist. Furthermore, with all her spite for educated women, feminism, and feminists, she had a much-loved protegee named Harriet Harraden, a university graduate and feminist writer whom Linton called “my little B.A.” [Remember the Ladies, Kirstin Olsen]