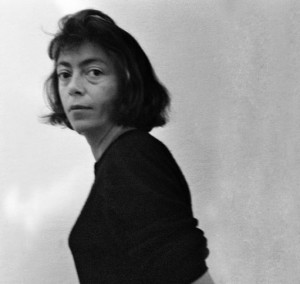 Joan Mitchell (February 12, 1925 – October 30, 1992) was an American “second generation” abstract expressionist painter and printmaker. She was a member of the American abstract expressionist movement, even though much of her career took place in France.[1] Along with Lee Krasner, Grace Hartigan, Helen Frankenthaler and Sonia Gechtoff, she was one of her era’s few female painters to gain critical and public acclaim. Her paintings and editioned prints can be seen in major museums and collections across the United States and Europe.

Mitchell is recognized as a principal figure – and one of the few female artists – in the second generation of American Abstract Expressionists. By the early 1950s, she was regarded as a leading artist in the New York School. In her early years as a painter, she was influenced by Paul Cézanne, Wassily Kandinsky, Claude Monet, Vincent van Gogh, and later by the work of Franz Kline and Willem de Kooning, Jean-Paul Riopelle, among others. Her paintings are expansive, often covering two separate panels. Landscape was the primary influence on her subject matter. She painted on unprimed canvas or white ground with gestural, sometimes violent brushwork. She has described a painting as “an organism that turns in space.”

An admirer of Vincent van Gogh’s work, Mitchell observed in one of his final paintings – Wheatfield with Crows (1890) – the symbology of death, suicide, hopelessness, depression and darkness. With her sense that Wheatfield with Crows was a suicide note, she painted a painting called No Birds as a response and as an homage.

After moving to Paris in 1959, Mitchell began painting in a studio on the rue Fremicourt in the 15th arrondissement of Paris. During the period between 1960 and 1964, she moved away from the all-over style and bright colors of her earlier compositions, instead using sombre hues and dense central masses of color to express something inchoate and primordial. The marks on these works were said to be extraordinary: “The paint flung and squeezed on to the canvases, spilling and spluttering across their surfaces and smeared on with the artist’s fingers.” The artist herself referred to the work created in this period of the early 1960s as “very violent and angry,” but by 1964 she was “trying to get out of a violent phase and into something else.”

According to art historian Linda Nochlin, the “meaning and emotional intensity [of Mitchell’s pictures] are produced structurally, as it were, by a whole series of oppositions: dense versus transparent strokes; gridded structure versus more chaotic, ad hoc construction; weight on the bottom of the canvas versus weight at the top; light versus dark; choppy versus continuous strokes; harmonious and clashing juxtapositions of hue – all are potent signs of meaning and feeling.”

Mitchell said that she wanted her paintings “to convey the feeling of the dying sunflower” and “some of them come out like young girls, very coy … they’re very human.”