She was born in York, Maine to James Knight and Hannah Teal. James Knight died when Margaret was a little girl. Knight went to school until she was twelve and worked in a cotton mill between ages 12 through 1856. In 1868, while living in Springfield, Massachusetts, Knight invented a machine that folded and glued paper to form the flat bottomed brown paper bags familiar to shoppers today. 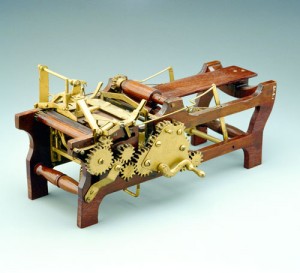 Knight built a wooden model of the device, but needed a working iron model to apply for a patent. Charles Annan, who was in the machine shop where Knight’s iron model was being built, stole her design and patented the device. Knight filed a successful patent interference lawsuit and was awarded the patent in 1871. With a Massachusetts business man, Knight established the Eastern Paper Bag Co. and received royalties.

Her many other inventions included a numbering machine, window frame and sash, patented in 1894, and several devices relating to rotary engines, patented between 1902 and 1915. Knight’s original bag-making machine is in the Smithsonian Museum in Washington, D.C.. Margaret never married and died on October 12, 1914 at the age of 76.

She was awarded the Decoration of the Royal Legion of Honour by Queen Victoria in 1871. A plaque recognizing her as the “first woman awarded a U.S. patent” and holder of 87 U.S. patents hangs on the Curry Cottage at 287 Hollis St in Framingham. However, Knight was not actually the first female patent-holder. The first was Hannah Wilkinson Slater, wife of industrialist Samuel Slater: she invented two-ply thread, becoming in 1793 the first American woman to be granted a patent. Knight was inducted in the National Inventors Hall of Fame in 2006.

Apple Applies For a Patent To Control Unauthorized Use of iPhones