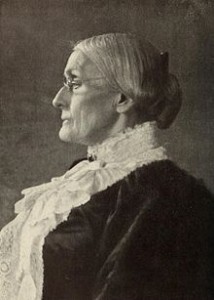 Portrait of Susan B. Anthony, by Francis Benjamin Johnston

Susan Brownell Anthony (February 15, 1820 – March 13, 1906) was a prominent American civil rights leader and feminist who played a pivotal role in the 19th century women’s rights movement to introduce women’s suffrage into the United States. She was co-founder of the first Women’s Temperance Movement with Elizabeth Cady Stanton as President. She also co-founded the women’s rights journal, The Revolution. She traveled the United States and Europe, and averaged 75 to 100 speeches per year. She was one of the important advocates in leading the way for women’s rights to be acknowledged and instituted in the American government. Her birthday on February 15 is commemorated as Susan B. Anthony Day in the U.S. states of California, Florida, New York, West Virginia and Wisconsin.

In the years before the American Civil War, Anthony took a prominent role in the New York anti-slavery and temperance movements. In 1837, at age 17, Susan collected petitions opposing slavery as part of an organized response to the gag rule prohibiting anti-slavery petitions in the House of Representatives. In 1849, at age 29, she became secretary for the Daughters of Temperance, which gave her a forum to speak out against alcohol abuse, and served as the beginning of Anthony’s movement towards the public limelight.

In late 1850, Anthony read a detailed account in the New York Tribune of the first National Women’s Rights Convention in Worcester, Massachusetts. In the article, Horace Greeley wrote an especially admiring description of the final speech, one given by Lucy Stone. Stone’s words catalyzed Anthony to devote her life to women’s rights. In the summer of 1852, Anthony met both Greeley and Stone in Seneca Falls.

In 1851, on a street in Seneca Falls, Anthony was introduced to Elizabeth Cady Stanton by a mutual acquaintance, as well as fellow feminist Amelia Bloomer. Anthony joined with Stanton in organizing the first women’s state temperance society in America after being refused admission to a previous convention on account of her sex, in 1851. Stanton remained a close friend and colleague of Anthony’s for the remainder of their lives, but Stanton longed for a broader, more radical women’s rights platform. Together, the two women traversed the United States giving speeches and attempting to persuade the government that society should treat men and women equally.

Anthony was invited to speak at the third annual National Women’s Rights Convention held in Syracuse, New York in September 1852. She and Matilda Joslyn Gage both made their first public speeches for women’s rights at the convention. Anthony began to gain notice as a powerful public advocate of women’s rights and as a new and stirring voice for change. Anthony participated in every subsequent annual National Women’s Rights Convention, and served as convention president in 1858.

In 1856, Anthony further attempted to unify the African-American and women’s rights movements when, recruited by abolitionist Abby Kelley Foster, she became an agent for William Lloyd Garrison’s American Anti-Slavery Society of New York. Speaking at the Ninth National Women’s Rights Convention on May 12, 1859, Anthony asked “Where, under our Declaration of Independence, does the Saxon man get his power to deprive all women and Negroes of their inalienable rights?”

Universal manhood suffrage, by establishing an aristocracy of sex, imposes upon the women of this nation a more absolute and cruel despotism than monarchy; in that, woman finds a political master in her father, husband, brother, son. The aristocracies of the old world are based upon birth, wealth, refinement, education, nobility, brave deeds of chivalry; in this nation, on sex alone; exalting brute force above moral power, vice above virtue, ignorance above education, and the son above the mother who bore him. ~ National Woman Suffrage Association.

United States v. Susan B. Anthony
On November 18, 1872, Anthony was arrested by a U.S. Deputy Marshal for voting on November 5 in the 1872 Presidential Election two weeks earlier. She had written to Stanton on the night of the election that she had “positively voted the Republican ticket—straight…”. She was tried and convicted seven months later, despite the stirring and eloquent presentation of her arguments based on the recently adopted Fourteenth Amendment:

The privileges of citizenship, which contained no gender qualification, gave women the constitutional right to vote in federal elections. Her trial took place at the Ontario County courthouse in Canandaigua, New York, before Supreme Court Associate Justice Ward Hunt. Justice Hunt refused to allow Anthony to testify on her own behalf, allowed statements given by her at the time of her arrest to be allowed as “testimony,” explicitly ordered the jury to return a guilty verdict, refused to poll the jury afterwards, and read an opinion he had written before the trial even started. In response to the unfairness of the “trial”, Anthony repeatedly ignored the judge’s admonishments to stop talking at the delivery of the verdict, finally stating: “May it please your honour, I will never pay a dollar of your unjust penalty. All the stock in trade I possess is a debt of $10,000, incurred by publishing my paper – The Revolution – the sole object of which was to educate all women to do precisely as I have done, rebel against your man-made, unjust, unconstitutional forms of law, which tax, fine, imprison and hang women, while denying them the right of representation in the government; and I will work on with might and mine to pay every dollar of that honest debt, but not a penny shall go to this unjust claim. And I shall earnestly and persistently continue to urge all women to the practical recognition of the old Revolutionary maxim, “Resistance to tyranny is obedience to God.” The sentence was a $100 fine, but not imprisonment; true to her word in court (“I shall never pay a dollar of your unjust penalty”), she never paid the fine for the rest of her life, and an embarrassed U.S. Government took no collection action against her. After her trial Anthony petitioned the United States Congress to remove the fine in January 1874.

The trial gave Anthony the opportunity to spread her arguments to a wider audience than ever before, because after her arrest and before her trial Anthony undertook an exhaustive speaking tour of all 29 of the towns and villages of Monroe county where her trial was to be held. In her speeches she addressed the question “Is it a Crime for a Citizen of the United States to Vote?” and quoted the Declaration of Independence, the United States Constitution, the New York Constitution, James Madison, Thomas Paine, the Supreme Court, and several of the leading Radical Republican senators of the day to support her case that women as citizens have a right to vote.[21] The district attorney obtained a change of venue because he determined that a fair trial could not take place in Monroe County. The trial was moved to Ontario County, and Anthony spoke to more than 20 Ontario audiences before the trial. Anthony argued that women, traditionally in servitude to man, should be included in the emancipation amendment granting voting privileges to former slaves. She asked her fellow citizens “how can the ‘consent of the governed’ be given if the right to vote be denied?”

Anthony toured Europe in 1883 and visited many charitable organizations. She wrote of a poor mother she saw in Killarney who had “six ragged, dirty children” to say that “the evidences were that ‘God’ was about to add a No. 7 to her flock. What a dreadful creature their God must be to keep sending hungry mouths while he withholds the bread to fill them!”

After retiring in 1900, Anthony remained in Rochester, where she died at the age of 86 of heart failure and pneumonia in her house at 17 Madison Street on March 13, 1906. She was buried at Mount Hope Cemetery. Following her death, the New York State Senate passed a resolution remembering her “unceasing labor, undaunted courage and unselfish devotion to many philanthropic purposes and to the cause of equal political rights for women.”

On August 26, 1936, thirty years after her death, the U.S. Post Office issued its first postage stamp honoring Susan B. Anthony which was also the 16th anniversary of ratification of the Nineteenth Amendment to the U.S. Constitution.

In honor of her legacy as a tireless champion of women’s suffrage, the Susan B. Anthony dollar coin was minted from 1979 to 1981, and again in 1999. It was the first circulating U.S. coin with the portrait of an actual woman rather than an allegorical female figure such as ‘Liberty’. Because it was too easily confused with the similarly sized quarter, the Susan B. Anthony dollar was one of the most unpopular U.S. coins.