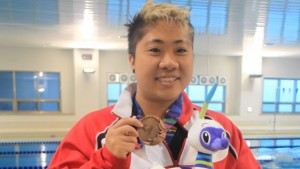 Theresa Goh Rui Si (born 16 February 1987) is a Singaporean Paralympic swimmer. Due to congenital spina bifida, she does not have use of her legs. Nonetheless, she started swimming at the age of five years, and began taking part in competitions at age 12. She soon established herself as a top competitor, winning medals at, among others, the ASEAN ParaGames (2001, 2003, 2005 and 2008), Far East and South Pacific Games Federation for the Disabled (FESPIC) Games (now known as the Asian Para Games) (2002), International Stoke Mandeville Wheelchair Sports Federation (ISMWSF) World Wheelchair Games (2003), National Swimming Championships (2004), and International Paralympic Committee (IPC) World Swimming Championships (2006).

Goh competes in sport class S5 for the freestyle, SB4 for the breaststroke and SM5 for the individual medley. As of 22 August 2008, she held the world record for the 50 metres and 200 metres breaststroke, and was ranked second in the world for the 100 metres breaststroke and third for the 200 metres individual medley. Goh received the 2001 Sportsgirl Merit Award from the Singapore Disability Sports Council (SDSC) and was named Sportsgirl of the Year in 2002 and 2003. From 2004 to 2006, she was the SDSC’s Sportswoman of the Year. On 27 February 2008 Goh received a special award at the SDSC’s Sports Superstar Awards 2007 for outstanding achievements in swimming, and in August that year she was conferred the Pingat Bakti Masyarakat (Public Service Medal) in the National Day Awards.