Marian Anderson (February 27, 1897 – April 8, 1993) was an African-American contralto and one of the most celebrated singers of the twentieth century. Music critic Alan Blyth said “Her voice was a rich, vibrant contralto of intrinsic beauty.” Most of her singing career was spent performing in concert and recital in major music venues and with famous orchestras throughout the United States and Europe between 1925 and 1965. Although offered roles with many important European opera companies, Anderson declined, as she had no training in acting. She preferred to perform in concert and recital only. She did, however, perform opera arias within her concerts and recitals. She made many recordings that reflected her broad performance repertoire of everything from concert literature to lieder to opera to traditional American songs and spirituals. 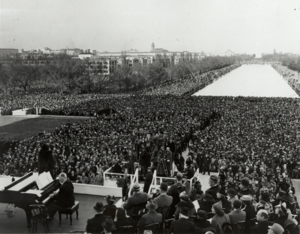 Anderson in her 1939 concert at the Lincoln Memorial

Anderson became an important figure in the struggle for black artists to overcome racial prejudice in the United States during the mid-twentieth century. In 1939, the Daughters of the American Revolution (DAR) refused permission for Anderson to sing to an integrated audience in Constitution Hall. The incident placed Anderson into the spotlight of the international community on a level unusual for a classical musician. With the aid of First Lady Eleanor Roosevelt and her husband Franklin D. Roosevelt, Anderson performed a critically acclaimed open-air concert on Easter Sunday, April 9, 1939, on the steps of the Lincoln Memorial in Washington, D.C. She sang before a crowd of more than 75,000 people and a radio audience in the millions. Anderson continued to break barriers for black artists in the United States, becoming the first black person, American or otherwise, to perform at the Metropolitan Opera in New York City on January 7, 1955. Her performance as Ulrica in Giuseppe Verdi’s Un ballo in maschera at the Met was the only time she sang an opera role on stage.

Anderson worked for several years as a delegate to the United Nations Human Rights Committee and as a “goodwill ambassadress” for the United States Department of State, giving concerts all over the world. She participated in the civil rights movement in the 1960s, singing at the March on Washington for Jobs and Freedom in 1963. The recipient of numerous awards and honors, Anderson was awarded the Presidential Medal of Freedom in 1963, the Kennedy Center Honors in 1978, the National Medal of Arts in 1986, and a Grammy Lifetime Achievement Award in 1991.

As a citizen of Danbury, Connecticut
From 1940 she resided at a 50-acre farm, having sold half of the original 100 acres, that she named Marianna Farm. The farm was on Joe’s Hill Road, in the Mill Plain section of Danbury in western Danbury, northwest of what in December 1961 became the interchange between Interstate 84, U.S. 6 and U.S. 202. She constructed a three-bedroom ranchhouse as a residence, and she used a separate one-room structure as her studio. In 1996 the farm was named one of 60 sites on the Connecticut Freedom Trail. The studio was moved to downtown Danbury as the Marian Anderson studio.

As a town resident she was set on waiting in line at shops and restaurants, declining offers to go ahead as a celebrity. She was known to visit the Danbury State Fair. She sang at the city hall on the occasion of the lighting of Christmas ornaments. She gave a concert at the Danbury High School. She served on the boards of the Danbury Music Center and supported the Charles Ives Center for the Arts the Danbury Chapter of the N.A.A.C.P. 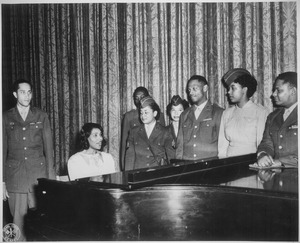 Although Anderson retired from singing in 1965, she continued to appear publicly. On several occasions she narrated Aaron Copland’s Lincoln Portrait, including a performance with the Philadelphia Orchestra at Saratoga in 1976, conducted by the composer. Her achievements were recognized and honored with many prizes, including the NAACP’s Spingarn Medal in 1939; University of Pennsylvania Glee Club Award of Merit in 1973; the United Nations Peace Prize, New York City’s Handel Medallion, and the Congressional Gold Medal, all in 1977; Kennedy Center Honors in 1978; the George Peabody Medal in 1981; the National Medal of Arts in 1986; and a Grammy Award for Lifetime Achievement in 1991. In 1980, the United States Treasury Department coined a half-ounce gold commemorative medal with her likeness, and in 1984 she was the first recipient of the Eleanor Roosevelt Human Rights Award of the City of New York. She has been awarded honorary doctoral degrees from Howard University, Temple University and Smith College.

In 1986, Anderson’s husband, Orpheus Fisher, died after 43 years of marriage. Anderson remained in residence at Marianna Farm until 1992, one year before her death. Although the property was sold to developers, various preservationists as well as the City of Danbury fought to protect Anderson’s studio. Their efforts proved successful and the Danbury Museum and Historical Society received a grant from the State of Connecticut, relocated the structure, restored it, and opened it to the public in 2004. In addition to seeing the studio, visitors can see photographs and memorabilia from milestones in Anderson’s career.

Anderson died of congestive heart failure on April 8, 1993, at age 96. She had suffered a stroke a month earlier. She died in Portland, Oregon, at the home of her nephew, conductor James DePreist. She is interred at Eden Cemetery, in Collingdale, Pennsylvania, a suburb of Philadelphia.

Legacy
The life and art of Marian Anderson has inspired several writers and artists. She was an example and an inspiration to both Leontyne Price and Jessye Norman. In 1999 a one-act musical play entitled My Lord, What a Morning: The Marian Anderson Story was produced by the Kennedy Center. In 2001, the 1939 documentary film, Marian Anderson: the Lincoln Memorial Concert was selected for preservation in the United States National Film Registry by the Library of Congress as being “culturally, historically, or aesthetically significant”.

In 2002, scholar Molefi Kete Asante included Marian Anderson in his book, 100 Greatest African Americans. On January 27, 2006, a commemorative U.S. postage stamp honored Marian Anderson as part of the Black Heritage series. Anderson is also pictured on the US$5,000 Series I United States Savings Bond.
The Marian Anderson House was added to the National Register of Historic Places in 2011.