Ruth Rowland Nichols (February 23, 1901 – September 25, 1960) was an aviation pioneer. She was the only woman yet to hold simultaneous world records for speed, altitude, and distance for a female pilot. Before Amelia Earhart broke these records and became famous, Ruth held this records first.

Biography
Nichols was born in New York City to Erickson Norman Nichols and Edith Corlis Haines. Her father was a member of the New York Stock Exchange, and had been a member of Teddy Roosevelt’s Rough Riders (officially known as The 1st United States Volunteer Cavalry). Ruth was sent to the Masters School, a private preparatory school for young women. On her graduation from high school in 1919, her father’s graduation present to her was an airplane ride with Edward Anderson “Eddie” Stinson, Jr., ace World War I pilot, which spurred her interest in becoming a pilot. After her graduation from the Masters School, she attended Wellesley College, studied pre medical, and graduated in 1924.

Career as a pilot
While a student at Wellesley College, Nichols secretly took flying lessons. Shortly after graduation, she received her pilot’s license, and became the first woman in the world to obtain a hydroplane license. She first achieved public fame in January 1928, as co-pilot for Harry Rogers, who had been her flying instructor, on the first non-stop flight from New York to Miami, Florida. Due to her socialite upbringing and aristocratic family background, Nichols became known in the press as the “Flying Debutante,” a name she hated. Nichols was then hired as a sales manager for Fairchild Aviation Corporation. In 1929, she was a founding member, with Amelia Earhart and others, of the Ninety-Nines, an organization of licensed women pilots. In August 1929, she and Earhart were among 20 competitors in the Women’s Air Derby (also known as the “Powder Puff Derby”), the first official women-only air race in the United States. They departed from Santa Monica, California, on 18 August for Cleveland, Ohio. Nichols crashed, while Earhardt finished third in the heavy class. 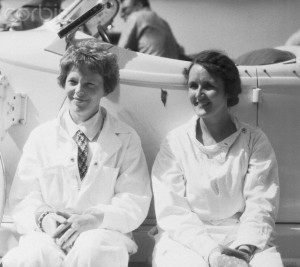 July 4, 1933: “Ruth Nichols and Amelia Earhart in Try for New Records.Los Angeles, California: Amelia Earhart (left) and Ruth Nichols (right), two of the nations’ foremost women fliers, seen as they attended the last day’s events of the National Air Races at Los Angeles, July 4th. They will attempt to establish a new transcontinental speed record for women in a flight from west to east, taking off from Los Angeles, July 6th.”

During the 1930s, while working for Fairchild and other aviation companies, Nichols made several record-setting flights. In 1930, she beat Charles Lindbergh’s record time for a cross-country flight, completing the trip in 13 hours, 21 minutes. In March, 1931, she set the women’s world altitude record of 28,743 feet (8760.9 m). In April 1931, she set the women’s world speed record of 210.7 miles per hour (339.1 km/h). In June, 1931, she attempted to become the first woman to fly solo across the Atlantic Ocean, but crashed in Newfoundland and was severely injured. Following her recovery, in October, 1931, she set the women’s distance record with a flight from Oakland, California to Louisville, Kentucky, 1,977 miles (3182 km).

On 14 February 1932, Nichols set a new world altitude record of 19,928 feet for diesel-powered aircraft at Floyd Bennett Field, NY while flying in a Lockheed Vega. On 29 December, Nichols became the first woman pilot of a commercial passenger airline, flying for New York and New England Airways.

On 21 October 1935, Nichols was critically injured in a crash during a private flight in Troy, New York. The flight was to be an airborne wedding for two couples over New York City, but the plane, a Curtiss Condor, registration NC725K, crashed shortly after takeoff, killing the pilot. Nichols received a broken left wrist, ankle and nose, contusions, burns and “possible internal injuries,” according to newspaper accounts of the crash. She was unable to fly for nearly a year after. When she returned to flying, Nichols went to work for the Emergency Peace Campaign, a Quaker organization that sought to promote peaceful resolution to international conflicts then brewing. In 1939, she headed Relief Wings, a civilian air service that performed emergency relief flights and assisted the Civil Air Patrol during World War II. Nichols would eventually attain the rank of lieutenant colonel in the Civil Air Patrol.

Following the war, Nichols became involved in other humanitarian efforts, using her celebrity to bring attention to causes and to raise funds. She organised a mission of support for UNICEF, including piloting a round-the-world tour in 1949. In the 1950s, she served as director of women’s activities for Save the Children, director of the women’s division of the United Hospital Fund, and field director for the National Nephrosis Foundation.

Women in space program
In 1959, as [NASA]’s Mercury program was preparing for missions to the moon, Nichols underwent the same isolation, centrifuge, and weightlessness tests that had been devised for the astronaut candidates. The tests were conducted at the Wright Air Development Center in Dayton, Ohio, by USAF Brigadier General Donald Flickinger. Flickinger, and his mentor Randy Lovelace (the bioastronautics pioneer who performed the medical selection of the Mercury Seven), had a far-reaching interest in research on the suitability of women as astronauts. However, no official records of the Air Research and Development Command, the experimental wing of the Air Force trying to get America into space, survive to document how or why this came about.

Although she didn’t pass all the Phase 1 tests that her female peers did (the Mercury 13), Nichols performed well enough on the tests and urged Air Force scientists to include women in their spaceflight plans. The scientists at Wright “thought of this with horror, and they said under no circumstances,” according to an oral historian to whom Nichols relayed the story. The test results were leaked to the media which, according to Flickinger, “turned the tide” against Air Force sponsorship of research into female astronaut candidates. Ultimately only Jerrie Cobb was able to complete all three phases of tests before NASA officially pulled the plug on the program.

Death
Suffering from severe depression she died of an accidental overdose of barbiturates at her home in New York City on September 25, 1960. She was interred at the The Woodlawn Cemetery in the Bronx, New York.