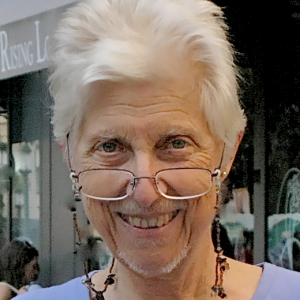 A lesbian activist-artist since the early 1970s, Cathy Cade has been publishing and exhibiting photographs of LGBT communities for over 40 years. ~ Aunt Lute

If you have an image in your head of a lesbian feminist, Cathy Cade probably helped put in there. For at least my entire adult life, I’ve been looking at her pictures in the dozen books and magazines where they’ve been featured, and in her own book, A Lesbian Photo Album: The Lives of Seven Lesbian Feminists.

Cathy became an activist while she was in college: in 1966 she joined the Civil Rights Movement, demonstrating and organizing with SNCC. As an opponent of the Vietnam War, she helped found the Tulane chapter of SDS, and later was an early actor in the Women’s Movement. In 1970, Cathy moved to San Francisco where she soon came out as a lesbian and started taking pictures, and her interconnected dedication to social justice and to photography has persisted throughout her life. Along with her documentary photo projects, Cathy runs a business as a professional photographer and personal historian. (Her website has details.) I was so excited when Cathy agreed to do an interview with me, and not only did we have a great time talking, but she managed to recruit me to a whole pile of women’s history related projects she’s involved with! 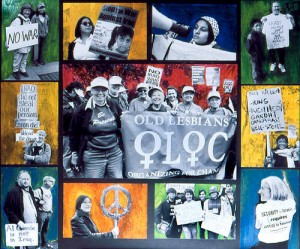 Old Lesbians Organizing for Change marching at an early anti-Iraq War demonstration. “I started cutting up my pictures and making collages. This was radical. I had all been black and white, documentary photography, and all the sudden I’m cutting up a print and I’m going, ‘Who do you think you are? God?'”

from: Veterans of the Civil Rights Movement

“I first heard of the civil rights movement when I was in 9th grade and someone in the Unitarian Church told me about Martin Luther King, Jr. and the movement in Montgomery. When I was a sophomore in High school, my father got transferred to Memphis. I went to Central High School in Memphis just when the crisis occurred in Little Rock. It was a segregated school and the question of integration was in everybody’s face.

When I was a junior at Carleton College in Minnesota in spring 1962, I went on an exchange program to Spelman College in Atlanta. Two days after I arrived I found myself sitting in at the GA State legislature with students from Spelman, Morehouse and the other schools at the Atlanta University Center, including professor Howard Zinn. I spent much of the rest of the time at Spelman at the Atlanta SNCC office. My senior year at Carleton, I did SNCC support work.

The summer after I graduated from college, I went to Albany, GA. I was there one day when I was arrested and spent 9 days in jail on a hunger fast with lots of other people. I spent the rest of the summer in the Atlanta office as a compromise with my father, who had had a nervous breakdown after visiting me in Albany. 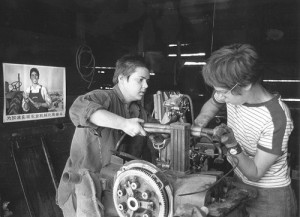 Gail Grassi and Kate Kaufman repairing a car. “It was a time when we all looked to the Chinese Revolution for progressive ideas of making the world a better place for people.”

The next fall I started graduate school at Tulane University in New Orleans. I was there two days when I got a call that SNCC workers were in town to help with voter registration. For a couple of weeks I joined them when I could. My first year at Tulane I was part of Tulane’s “Liberals Club” spent many weekends in Jackson helping to prepare for the summer project which I spent in Gulfport. I attended the founding conference of the Southern Student Organizing Committee in Nashville in May of ’64.

The next year at Tulane I helped to found and lead an organization called Students for Integration, which was a multi-campus student effort to desegregate restaurants in accordance with the newly passed Civil Rights Bill. The summer of 1965 I worked with Matt Suarez in New Orleans’ 4th ward. I helped found and lead the Tulane chapter of the Students for Democratic Society, which began to take on the issues of the Vietnam war.

In ’66 and ’67 I lived in Canton, MS where I did research for my sociology dissertation. I did a study on attitudes in the Black community about using consensus versus conflict methods of social change. Back in New Orleans I was part of the early Women’s Liberation Movement.

I moved to San Francisco in 1970 to be part of a larger women’s movement. I came out as a lesbian and began photographing the spring of 1971. I’m still a lesbian and a photographer and still work against racism.”

Cathy currently lives in Berkeley and remains very much a part of the activist women’s community around the world.