Ida Noddack (25 February 1896 – 24 September 1978), née Ida Tacke, was a German chemist and physicist. She was the first to mention the idea of nuclear fission in 1934. With her husband Walter Noddack she discovered element 75, rhenium. She was nominated three times for the Nobel Prize in Chemistry.

Background
Ida Tacke was born in Wesel, Lackhausen 1896. She was one of the first women in Germany to study chemistry. She attained a doctorate in 1921 at the Technical University of Berlin “On higher aliphatic fatty acid anhydrides” and worked afterwards in the field, becoming the first woman to hold a professional chemist’s position in the chemical industry in Germany. 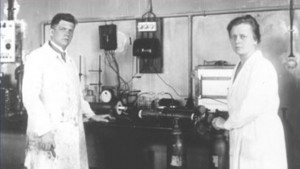 Io9: The first mind to split the atom could have changed world history

She and chemist Walter Noddack were married in 1926. Both before and after their marriage they worked as partners, an “Arbeitsgemeinschaft” or “work unit,” but with the exception of her work at the University of Strasbourg, her positions were unpaid appointments.

Nuclear fission
Noddack correctly criticized Enrico Fermi’s chemical proofs in his 1934 neutron bombardment experiments, from which he postulated that transuranic elements might have been produced, and which was widely accepted for a few years. Her paper, “On Element 93” suggested a number of possibilities, centering on Fermi’s failure to chemically eliminate all lighter than uranium elements in his proofs, rather than only down to lead. The paper is considered historically significant today not simply because she correctly pointed out the flaw in Fermi’s chemical proof but because she suggested the possibility that “it is conceivable that the nucleus breaks up into several large fragments, which would of course be isotopes of known elements but would not be neighbors of the irradiated element.” In so doing she presaged what would become known a few years later as nuclear fission. However Noddack offered no experimental proof or theoretical basis for this possibility, which defied the understanding at the time. The paper was generally ignored.

Later experiments along a similar line to Fermi’s, by Irène Joliot-Curie, and Pavle Savi? in 1938 raised what they called “interpretational difficulties” when the supposed transuranics exhibited the properties of rare earths rather than those of adjacent elements. Ultimately on December 17, 1938, Otto Hahn and Fritz Strassmann provided chemical proof that the previously presumed transuranic elements were isotopes of barium, and Hahn wrote these exciting results to his exiled colleague Lise Meitner, explaining the process as a ‘bursting’ of the uranium nucleus into lighter elements. It remained for Meitner who had been forced to flee Germany in July 1938 and her exiled nephew Otto Frisch utilizing Fritz Kalckar and Niels Bohr’s liquid drop hypothesis (first proposed by George Gamow in 1935) to provide a first theoretical model and mathematical proof of what Frisch named nuclear fission (he coined this term). (Frisch also experimentally verified the fission reaction by means of a cloud chamber, confirming the energy release).[

Element discovery priority
Ida and her husband-to-be looked for the then still unknown elements 43 and 75 at the Physikalisch-Technische Reichsanstalt. In 1925, they published a paper (Zwei neue Elemente der Mangangruppe, Chemischer Teil) claiming to have done so, and called the new elements Rhenium (75) and Masurium (43). Only the discovery of rhenium was confirmed. They were unable to isolate element 43 and their results were not reproducible. Their choice of the term masurium was also considered unacceptably nationalistic and may have contributed to a poor reputation amongst scientists of the day.

Artificially produced element 43 was definitively isolated in 1937 by Emilio Segrè and Carlo Perrier from a discarded piece of molybdenum foil from a cyclotron which had undergone beta decay. It was eventually named technetium due to its artificial source. No isotope of technetium has a half-life longer than 4.2 million years and was presumed to have disappeared on Earth as a naturally occurring element. In 1961 minute amounts of technetium in pitchblende produced from spontaneous 238U fission were discovered by B. T. Kenna and Paul K. Kuroda. Based on this discovery, Belgian physicist Pieter van Assche constructed an analysis of their data to show that the detection limit of Noddacks’ analytical method could have been 1000 times lower than the 10?9 value reported in their paper, in order to show the Noddacks could have been the first to find measurable amounts of element 43, as the ores they had analyzed contained uranium. Using Van Assche’s estimates of the Noddacks’ residue compositions, NIST scientist John T. Armstrong, simulated the original X-ray spectrum with a computer, and claimed that the results were “surprisingly close to their published spectrum!” Gunter Herrmann from the University of Mainz examined van Assche’s arguments, and concluded they were developed ad hoc, and forced to a predetermined result. According to Kenna and Kuroda 99technetium content expected in a typical pitchblende (50% uranium) is about 10 ?10 g/kg of ore. F. Habashi pointed out that uranium was never more than about 5% in Noddacks’ columbite samples, and the amount of element 43 could not exceed 3 × 10 ?11 µg/kg of ore. Such a low quantity could not be weighed, nor give X-ray lines of element 43 clearly distinguishable from the background noise. The only way to detect its presence is to carry out radioactive measurements, a technique the Noddacks did not use, but Segrè and Perrier did.

Following on the van Assche and Armstrong claims, an investigation was made into the works of Masataka Ogawa who had made a prior claim to the Noddacks. In 1908 he claimed to have isolated element 43, calling it Nipponium. Using an original plate (not a simulation), Kenji Yoshihara determined Ogawa had not found the Period 5 Group 7 element 43 (eka-manganese), but had successfully separated Period 6 Group 7 element 75 (dvi-manganese) (rhenium), preceding the Noddacks by 17 years.

Nobel nominations
Ida Noddack was nominated three times for the Nobel Prize in Chemistry, once by Walther Nernst and K. L. Wagner for 1933; both Noddacks were nominated by W. J. Müller for 1935 and by A. Skrabal for 1937.