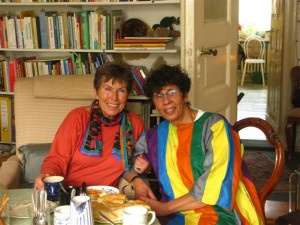 Dagmar and her spouse, Ika Hügel-Marshall

Dagmar Schultz was born in Berlin and started her studies at the Free University of Berlin before going to the University of Michigan to study film, television and journalism in 1963. During the 1960s she was active in the Civil Rights Movement and the women’s movement. She taught at several colleges and universities – for example at Rust College, a Black college in Mississippi in 1965/66 and worked in Puerto Rico. In 1973 she returned to Berlin and taught at the John F. Kennedy Institute of North American Studies at the Free University of Berlin. She co-founded the Orlanda Women’s Press in 1974 and remained it’s (co-) publisher until 2001. Dagmar Schultz arranged for Lorde to be invited as a Guest Professor at the John-F.-Kennedy Institute in 1984. Schultz edited “Macht und Sinnlichkeit” Selected texts by Audre Lorde and Adrienne Rich and Orlanda published further works by Audre Lorde as well as the book “Showing Our Colors. Afro-german women speak out.” In 2011 Schultz was awarded the Margherita-von-Brentano-Price 2011 for work which furthers the equal rights of women in academia.The funds of the award contributed to the production of the film Audre Lorde –The BerlinYears 1984 to 1992 and to the establishment of an Audre Lorde Archive at the Free University of Berlin, which contains all of Schultz’s materials on Audre Lorde. See website: www.audrelorde-theberlinyears.com

from her web site: DagmarSchultz.com 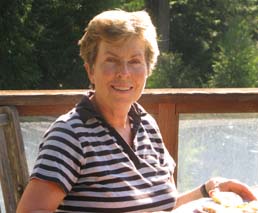 Born in Berlin, Germany, Dagmar Schultz first studied at the Free University of Berlin and then studied and worked in the United States and in Puerto Rico from 1963 – 1972. Between 1963 and 1965 she taught Speech (direction and production of documentary films), Journalism, and Theatre. In 1965 she taught at Rust College in Holly Springs, Mississippi and was active in the civil rights movement. In 1969 – 1970 she taught at Columbia College in Chicago. She received her Ph.D. from the University of Wisconsin at Madison with a dissertation on workers‘ education in 1972 and her Habilitation from the Free University of Berlin with a study on the life and work of women and men professors.

Dagmar Schultz taught at the John F. Kennedy Institute of North American Studies at the Free University of Berlin from 1973-1986 women’s studies and cultural and immigration issues. From 1991 to 2004, she was a professor of Social Work at the Alice-Salomon University of Applied Sciences in Berlin, Germany. Her teaching and research have focused on feminist studies and women’s movements, on anti-racist social work, on women’s health care and on cultural competence in the psychiatric care of migrants and minorities.

In 1974, after her return to Berlin, Dagmar Schultz was a co-founder of the Feminist Women’s Health Center in Berlin in 1974, the first of its kind in Germany. She worked with the center until 1981. She also co-founded Orlanda Women’s Press (Orlanda Frauenverlag) in 1974 and was its (co-)publisher until 2001.

Since 2004, Dagmar Schultz has been involved in writing and in organizing reading tours around the world for the film, www.audrelorde-theberlinyears.com, for her partner, Afro-German activist Ika Hügel-Marshall (author of Invisible Woman. Growing up Black in Germany) as well as other events. In 2007 she was the co-producer of the film Hope in My Heart – The May Ayim Story, available through Third World Newsreel, NYC.