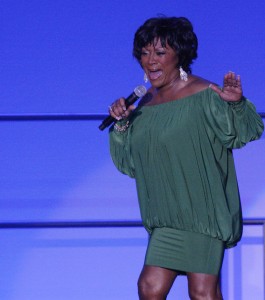 This image, which was originally posted to Flickr.com, was uploaded to Commons using Flickr upload bot on 01:33, 24 July 2008 (UTC) by Miranda (talk). On that date it was licensed under the license below.

Patricia Louise Holte-Edwards (born May 24, 1944), better known under the stage name Patti LaBelle, is an American singer, author, and actress who has spent over 50 years in the music industry. LaBelle spent 16 years as lead singer of Patti LaBelle and the Bluebelles, who changed their name to Labelle in the early 1970s and released the iconic disco song “Lady Marmalade“. Labelle are also noted for being the first African American group to play at the prestigious Metropolitan Opera House and the first African American vocal group to land the cover of Rolling Stone magazine.

Her solo career began shortly after the group disbanded in 1977 with the release of her self-titled and critically acclaimed debut album. In 1984 she achieved her first number one R&B hit with “If Only You Knew“, while later in the year, she crossed over to pop music with singles such as “New Attitude” and “Stir It Up“, both becoming pop radio staples. Her success with the number one single “On My Own“, a duet with Michael McDonald which was taken from her triple platinum selling album Winner in You as well as 1989’s “If You Asked Me To“. Her tenth album Burnin‘ earned her first Grammy. She maintained commercial appeal and gained a younger audience with albums such as 1994’s Gems and 1997’s Flame. In 1998 Patti Labelle earned her second Grammy award for her Live! One Night Only CD. Her 2004 release Timeless Journey earned her another top five RnB album, while in 2008 Labelle reunited as a group after over 32 years releasing the acclaimed Back to Now which was followed by a successful reunion tour.

The singer has been inducted into the Grammy Hall of Fame, the Hollywood Walk of Fame, the Apollo Hall of Fame, and the Songwriters’ Hall of Fame. In 2005, the World Music Awards presented her with the coveted Legend Award. Labelle has sold over 50 million records worldwide and Rolling Stone Magazine includes her on its 100 Greatest Singers List. She possesses the vocal range of a soprano. Patti LaBelle is also commonly identified as the “Godmother of Soul”, the “High Priestess of Good Vibrations”, and the “Queen of Rock ‘n’ Soul”.

LaBelle is also a noted actress having a supporting role in the Oscar nominated drama A Soldier’s Story as well as being a recurring character in the acclaimed sitcom A Different World. She guest-starred in the fourth season of the Emmy Award winning American Horror Story, subtitled Freak Show. She also competed on ABC’s Dancing with the Stars.