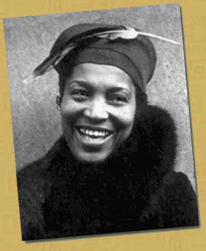 Zora Neale Hurston is considered one of the pre-eminent writers of twentieth-century African-American literature. Hurston was closely associated with the Harlem Renaissance and has influenced such writers as Ralph Ellison, Toni Morrison, Gayle Jones, Alice Walker, and Toni Cade Bambara.

In 1975, Ms. Magazine published Alice Walker’s essay, “In Search of Zora Neale Hurston” reviving interest in the author. Hurston’s four novels and two books of folklore resulted from extensive anthropological research and have proven invaluable sources on the oral cultures of African America.

Through her writings, Robert Hemenway wrote in The Harlem Renaissance Remembered, Hurston “helped to remind the Renaissance–especially its more bourgeois members—of the richness in the racial heritage.”

“I have the nerve to walk my own way, however hard, in my search for reality, rather than climb upon the rattling wagon of wishful illusions.” ~ Letter from Zora Neale Hurston to Countee Cullen

Born on Jan. 7, 1891, in Notasulga, Alabama, Hurston moved with her family to Eatonville, Florida, when she was still a toddler. Her writings reveal no recollection of her Alabama beginnings. For Hurston, Eatonville was always home.

Established in 1887, the rural community near Orlando was the nation’s first incorporated black township. It was, as Hurston described it, “a city of five lakes, three croquet courts, three hundred brown skins, three hundred good swimmers, plenty guavas, two schools, and no jailhouse.”

Growing up in this culturally affirming setting in an eight-room house on five acres of land, Zora had a relatively happy childhood, despite frequent clashes with her preacher-father, who sometimes sought to “squinch” her rambunctious spirit, she recalled. Her mother, on the other hand, urged young Zora and her seven siblings to “jump at de sun.” Hurston explained, “We might not land on the sun, but at least we would get off the ground.”

Hurston’s idyllic childhood came to an abrupt end, though, when her mother died in 1904. Zora was only 13 years old. “That hour began my wanderings,” she later wrote. “Not so much in geography, but in time. Then not so much in time as in spirit.”

…
By 1935, Hurston—who’d graduated from Barnard College in 1928—had published several short stories and articles, as well as a novel (Jonah’s Gourd Vine) and a well-received collection of black Southern folklore (Mules and Men). But the late 1930s and early ’40s marked the real zenith of her career. She published her masterwork, Their Eyes Were Watching God, in 1937; Tell My Horse, her study of Caribbean Voodoo practices, in 1938; and another masterful novel, Moses, Man of the Mountain, in 1939. When her autobiography, Dust Tracks on a Road, was published in 1942, Hurston finally received the well-earned acclaim that had long eluded her. That year, she was profiled in Who’s Who in America, Current Biography and Twentieth Century Authors. She went on to publish another novel, Seraph on the Suwanee, in 1948.

Still, Hurston never received the financial rewards she deserved. (The largest royalty she ever earned from any of her books was $943.75.) So when she died on Jan. 28, 1960–at age 69, after suffering a stroke–her neighbors in Fort Pierce, Florida, had to take up a collection for her February 7 funeral. The collection didn’t yield enough to pay for a headstone, however, so Hurston was buried in a grave that remained unmarked until 1973.