Oprah Gail Winfrey (born Orpah Gail Winfrey; January 29, 1954) is an American media proprietor, talk show host, actress, producer, and philanthropist. She is best known for her talk show The Oprah Winfrey Show, which was the highest-rated television program of its kind in history and was nationally syndicated from 1986 to 2011. Dubbed the “Queen of All Media”, she has been ranked the richest African-American, the greatest black philanthropist in American history, and is currently North America’s first and only multi-billionaire black person. Several assessments rank her as the most influential woman in the world. In 2013, she was awarded the Presidential Medal of Freedom by President Barack Obama and honorary doctorate degrees from Duke and Harvard. 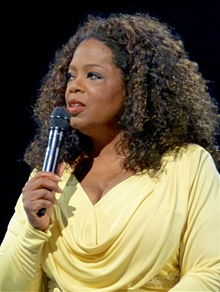 Winfrey was born into poverty in rural Mississippi to a teenage single mother and later raised in an inner-city Milwaukee neighborhood. She has stated that she was molested during her childhood and early teens and became pregnant at 14; her son died in infancy. Sent to live with the man she calls her father, a barber in Tennessee, Winfrey landed a job in radio while still in high school and began co-anchoring the local evening news at the age of 19. Her emotional ad-lib delivery eventually got her transferred to the daytime-talk-show arena, and after boosting a third-rated local Chicago talk show to first place, she launched her own production company and became internationally syndicated.

Credited with creating a more intimate confessional form of media communication, she is thought to have popularized and revolutionized the tabloid talk show genre pioneered by Phil Donahue, which a Yale study says broke 20th-century taboos and allowed LGBT people to enter the mainstream. By the mid-1990s, she had reinvented her show with a focus on literature, self-improvement, and spirituality. Though criticized for unleashing a confession culture, promoting controversial self-help ideas, and an emotion-centered approach, she is often praised for overcoming adversity to become a benefactor to others. From 2006 to 2008, Oprah Winfrey’s endorsement of Barack Obama, by one estimate, delivered over a million votes in the close 2008 Democratic primary race.

“Oprahfication”
The Wall Street Journal coined the term “Oprahfication”, meaning public confession as a form of therapy. By confessing intimate details about her weight problems, tumultuous love life, and sexual abuse, and crying alongside her guests, Time magazine credits Winfrey with creating a new form of media communication known as “rapport talk” as distinguished from the “report talk” of Phil Donahue: “Winfrey saw television’s power to blend public and private; while it links strangers and conveys information over public airwaves, TV is most often viewed in the privacy of our homes. Like a family member, it sits down to meals with us and talks to us in the lonely afternoons. Grasping this paradox, … She makes people care because she cares. That is Winfrey’s genius, and will be her legacy, as the changes she has wrought in the talk show continue to permeate our culture and shape our lives.”

Observers have also noted the “Oprahfication” of politics such as “Oprah-style debates” and Bill Clinton being described as “the man who brought Oprah-style psychobabble and misty confessions to politics.” Newsweek stated: “Every time a politician lets his lip quiver or a cable anchor ’emotes’ on TV, they nod to the cult of confession that Oprah helped create. Winfrey’s disclosures about her weight (which peaked at 108 kg (238 lb)) also paved the way for other plus-sized women in media such as Roseanne Barr, Rosie O’Donnell and Star Jones. The November 1988 Ms. observed that “in a society where fat is taboo, she made it in a medium that worships thin and celebrates a bland, white-bread prettiness of body and personality […] But Winfrey made fat sexy, elegant – damned near gorgeous – with her drop-dead wardrobe, easy body language, and cheerful sensuality.”

Mainstream acceptance of LGBT people
While Phil Donahue has been credited with pioneering the tabloid talk show genre, Winfrey’s warmth, intimacy and personal confession popularized and changed it. Her success at popularizing of the tabloid talk show genre had opened up a thriving industry that has included Ricki Lake, The Jenny Jones Show, and The Jerry Springer Show. Sociologists such as Vicki Abt criticized tabloid talk shows for redefining social norms. In her book Coming After Oprah: Cultural Fallout in the Age of the TV talk show, Abt warned that the media revolution that followed Winfrey’s success was blurring the lines between “normal” and “deviant” behavior. In the book Freaks Talk Back, Yale sociology professor Joshua Gamson credits the tabloid talk show genre with providing much needed high impact media visibility for gay, bisexual, transsexual, and transgender (LGBT) people and doing more to make them mainstream and socially acceptable than any other development of the 20th century. In the book’s editorial review Michael Bronski wrote, “In the recent past, lesbians, gay men, bisexuals, and transgendered people had almost no presence on television. With the invention and propagation of tabloid talk shows such as Jerry Springer, Jenny Jones, Oprah, and Geraldo, people outside the sexual mainstream now appear in living rooms across America almost every day of the week.” Gamson credits the tabloid talk show with making alternative sexual orientations and identities more acceptable in mainstream society. Examples include a Time magazine article describing early 21st-century gays coming out of the closet younger and younger and gay suicide rates plummeting. Gamson also believes that tabloid talk shows caused gays to be embraced on more traditional forms of media. Examples include sitcoms like Will & Grace, primetime shows like Queer Eye for the Straight Guy and Oscar-nominated feature films like Boys Don’t Cry and Brokeback Mountain.

In April 1997, Winfrey played the therapist in “The Puppy Episode” on the sitcom Ellen to whom the character (and the real-life Ellen DeGeneres) said she was a lesbian. In 1998, Mark Steyn in the National Review wrote of Winfrey, “Today, no truly epochal moment in the history of the Republic occurs unless it is validated by her presence. When Ellen said, ‘Yep! I’m gay,’ Oprah was by her side, guesting on the sitcom as (what else?) the star’s therapist.”