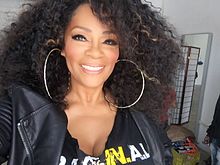 Jody Vanessa Watley (born January 30, 1959) is an American singer, songwriter, record producer, and pioneering trendsetting artist in music, video and style whose music crosses genres including pop, R&B, jazz, dance and electronic soul. In 1987, she won the Grammy Award for “Best New Artist.” Along with Janet Jackson and Madonna, she ranks as one of MTV Video Music Awards most nominated female artists ever, with six nominations for her ‘Real Love’ video.

In 2008, she was the recipient of a Lifetime Achievement Award from Billboard magazine, and was also prominently featured in the historic black issue of Vogue Italia in 2008. Her early music influences are Diana Ross, Marvin Gaye, Stevie Wonder, Michael Jackson, The Jackson 5, The Carpenters, Roberta Flack, Prince, Grace Jones and various jazz artists including Nancy Wilson.

In December 2016, Billboard magazine ranked her as the 21th most successful dance artists of all-time.

Jody Watley is also the distinct sound of the group Shalamar as the original female lead vocalist on soul classics like “Take That To The Bank ” and “A Night To Remember.” Watley’s music crosses genres from Disco, Soul/ R&B, Pop Crossover, Freestyle, Hip-hop, Funk and Dance/Electronica. Continuing to evolve artistically and as entrepreneur you can add groundbreaking ad campaigns, and fashion layouts making you understand why Watley is regarded as a music legend and remains a venerable influential force creating the template for other female artists in music. (JodyWatley.net)