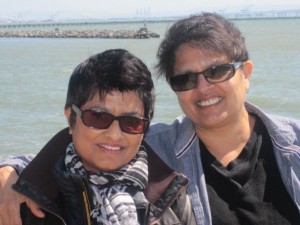 Pratibha Parmar is a British filmmaker, and has worked as a director, producer and writer. Parmar is known internationally for her political and often controversial documentary film work as well as her activism within the global feminism and lesbian rights movements. She has collaborated with many well-known artists and activists, and public figures, specifically using the camera to benefit women worldwide. Focusing her lens on disenfranchised communities and peoples internationally, her contribution to worldwide humanitarian rights and education has been crucial. Her films are marked by political complexity and visual richness, taking up the themes of women’s strength, racial and cultural oppression and the lives of South Asian LBGT people. Parmar is well known for drawing on humour, wit, women’s everyday lives and visionary storytelling to articulate the realities and dreams of feminist, queer and South Asian diasporic life.

In particular, Parmar’s award-winning documentary Warrior Marks (1993), made in collaboration with Pulitzer Prize-winning novelist Alice Walker (author of The Color Purple), located Parmar deep within multiple conversations about globalization and women’s responsibilities to other women. Parmar went on to co-publish Warrior Marks: Female Genital Mutilation and the Sexual Blinding of Women with Walker.

In the fall of 2007, Pratibha Parmar was awarded the Visionary Award by the One in Ten Film Festival for her entire body of work and she is a past winner of the San Francisco Frameline Film Festival Lifetime Achievement Award. [gathered from Wikipedia, etc.]

Founded by Pratibha Parmar in 2000, Kali Films is a film and television production company engaged in the creation and business of making feature films, documentaries, music and educational, corporate videos that are entertaining, thought provoking, intelligent and aesthetically stunning. [Kali Films is] committed to making media for multiple platforms to ensure that our work contributes positively to social, cultural change. Clients have included Channel 4 Television, BBC, Sky, LOCOG (The 2012 London Organizing Committee of the Olympic Games and Paralympic Games) 2010 marked the creation of Kali8 Productions LLC (California, US) a sister company to Kali Films.

Her latest film, Alice Walker: Beauty In Truth is a feature documentary film which tells the compelling story of an extraordinary woman’s journey from her birth in a paper-thin shack in cotton fields of Putnam County, Georgia to her recognition as a key writer of the 20th Century. Alice Walker: Beauty In Truth offers audiences a penetrating look at the life and art of an artist, a self-confessed renegade and human rights activist. In 2010, Yoko Ono honored Walker with the LennonOno Peace Award, for her ongoing humanitarian work.