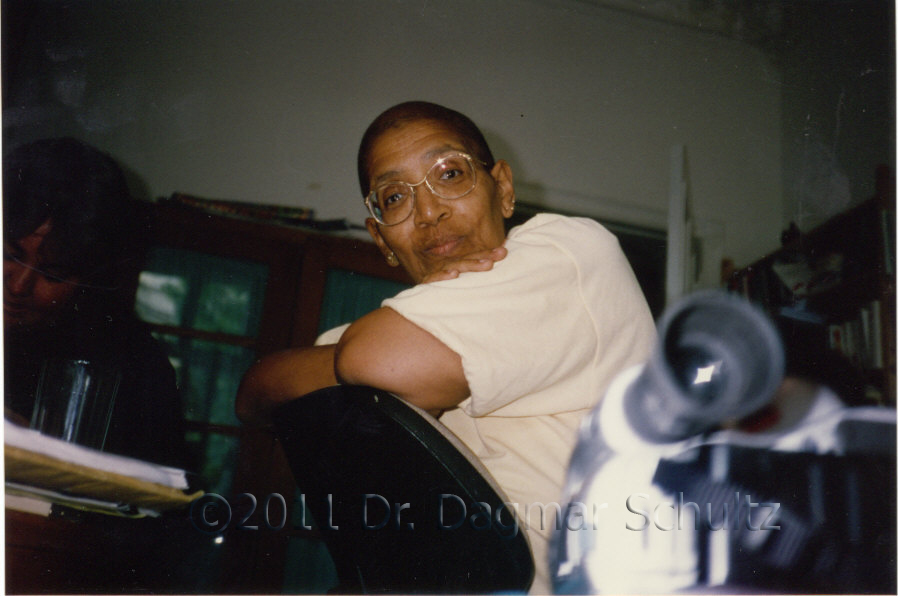 A self-styled “black, lesbian, mother, warrior, poet,” writer Audre Lorde dedicated both her life and her creative talent to confronting and addressing the injustices of racism, sexism, and homophobia. Her poetry, and “indeed all of her writing,” according to contributor Joan Martin in Black Women Writers (1950-1980): A Critical Evaluation, “rings with passion, sincerity, perception, and depth of feeling.” Concerned with modern society’s tendency to categorize groups of people, Lorde fought the marginalization of such categories as “lesbian” and “black woman,” thereby empowering her readers to react to the prejudice in their own lives. While the widespread critical acclaim bestowed upon Lorde for dealing with lesbian topics made her a target of those opposed to her radical agenda, she continued, undaunted, to express her individuality, refusing to be silenced. As she told interviewer Charles H. Rowell in Callaloo: “My sexuality is part and parcel of who I am, and my poetry comes from the intersection of me and my worlds…[White, arch-conservative senator] Jesse Helms’s objection to my work is not about obscenity…or even about sex. It is about revolution and change…Helms represents…white patriarchal power…[and he] knows that my writing is aimed at his destruction, and the destruction of every single thing he stands for.” Fighting a battle with cancer that she documented in her highly acclaimed Cancer Journals, Lorde died of the illness in 1992.

Born in New York City of West Indian parents, Lorde came to poetry in her early teens, through a need to express herself. Her first poem to be published was accepted by Seventeen magazine when she was still in high school. The poem had been rejected by her school paper, Lorde explains in Black Women Writers, because her “English teachers . . . said [it] was much too romantic.” Her mature poetry, published in volumes including New York Head Shop and Museum, Coal, and The Black Unicorn, is sometimes romantic also. Often dealing with her lesbian relationships, her love poems have nevertheless been judged accessible to all by many critics. In Martin’s words, “one doesn’t have to profess heterosexuality, homosexuality, or asexuality to react to her poems.… Anyone who has ever been in love can respond to the straightforward passion and pain sometimes one and the same, in Lorde’s poems.”

While Lorde’s love poems composed much of her earliest work, her experiences of civil unrest during the 1960s, along with Lorde’s own confusion over her sexuality—a bisexual, she married in 1962 and had two children before divorcing and making a renewed commitment to her female lovers—created a rapid shift to more political statements. As Jerome Brooks reported in Black Women Writers (1950-1980): A Critical Evaluation, “Lorde’s poetry of anger is perhaps her best-known work.” In her poem “The American Cancer Society, or There Is More than One Way to Skin a Coon,” she protested against white America thrusting its unnatural culture on blacks; in “The Brown Menace or Poem to the Survival of Roaches,” she likened blacks to cockroaches, hated, feared, and poisoned by whites. Poetry critic Sandra M. Gilbert remarked that “it’s not surprising that Lorde occasionally seems to be choking on her own anger…[and] when her fury vibrates through taut cables from head to heart to page, Lorde is capable of rare and, paradoxically, loving jeremiads.”

Lorde’s anger did not confine itself to racial injustice but extended to feminist issues as well, and occasionally she criticized African American men for their role in the perpetuating of sex discrimination: “As Black people, we cannot begin our dialogue by denying the oppressive nature of male privilege,” Lorde stated in Black Women Writers. “And if Black males choose to assume that privilege, for whatever reason, raping, brutalizing, and killing women, then we cannot ignore Black male oppression. One oppression does not justify another.”

“And if Black males choose to assume that privilege, for whatever reason, raping, brutalizing, and killing women, then we cannot ignore Black male oppression. One oppression does not justify another.”

Of her poetic beginnings Lorde once commented in Black Women Writers: “I used to speak in poetry. I would read poems, and I would memorize them. People would say, well what do you think, Audre. What happened to you yesterday? And I would recite a poem and somewhere in that poem would be a line or a feeling I would be sharing. In other words, I literally communicated through poetry. And when I couldn’t find the poems to express the things I was feeling, that’s what started me writing poetry, and that was when I was twelve or thirteen.” As an adult, her primary poetic goal remained communication. “I have a duty,” she stated later in the same publication, “to speak the truth as I see it and to share not just my triumphs, not just the things that felt good, but the pain, the intense, often unmitigating pain.” As a mature poet, however, rather than relying solely on poetry as a means of self-expression Lorde often extracted poems from her personal journals. Explaining the genesis of “Power,” a poem about the police shooting of a ten-year-old black child, Lorde discussed her feelings when she learned that the officer involved had been acquitted: “A kind of fury rose up in me; the sky turned red. I felt so sick. I felt as if I would drive this car into a wall, into the next person I saw. So I pulled over. I took out my journal just to air some of my fury, to get it out of my fingertips. Those expressed feelings are that poem.”

…Lorde’s “experiences are painted with exquisite imagery. Indeed, her West Indian heritage shows through most clearly in her use of word pictures that are sensual, steamy, at times near-tropical, evoking the colors, smells—repeatedly, the smells—shapes, textures that are her life.”

Lorde’s 1982 novel, Zami: A New Spelling of My Name, was described by its publishers as a “biomythography, combining elements of history, biography and myth,” and Rosemary Daniell, in the New York Times Book Review, considered the work “excellent and evocative…. Among the elements that make the book so good are its personal honesty and lack of pretentiousness, characteristics that shine through the writing, bespeaking the evolution of a strong and remarkable character.” Daniell said that, throughout the book, Lorde’s “experiences are painted with exquisite imagery. Indeed, her West Indian heritage shows through most clearly in her use of word pictures that are sensual, steamy, at times near-tropical, evoking the colors, smells—repeatedly, the smells—shapes, textures that are her life.”

In the late 1980s Lorde and fellow writer Barbara Smith founded Kitchen Table: Women of Color Press, which was dedicated to furthering the writings of black feminists. Lorde would also become increasingly concerned over the plight of black women in South Africa under apartheid, creating Sisterhood in Support of Sisters in South Africa and remaining an active voice on behalf of these women throughout the remainder of her life. Indeed, Lorde addressed her concerns to not only the United States but the world, encouraging a celebration of the differences that society instead used as tools of isolation. As Allison Kimmich noted in Feminist Writers, “Throughout all of Audre Lorde’s writing, both nonfiction and fiction, a single theme surfaces repeatedly. The black lesbian feminist poet activist reminds her readers that they ignore differences among people at their peril. . . . Instead, Lorde suggests, differences in race or class must serve as a ‘reason for celebration and growth.'” [from The Poetry Foundation]

A documentary about Audre’s involvement with Black Germans in the 80’s and 90’s was finished in 2012. Audre Lorde – The Berlin Years 1984 -1992, written and directed by close friend, Dagmar Schultz, can be purchased from the film’s web site: http://www.audrelorde-theberlinyears.com