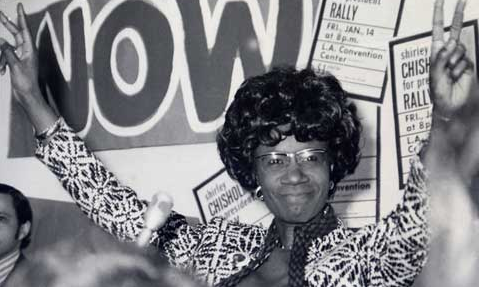 Shirley Anita St. Hill Chisholm (November 30, 1924 – January 1, 2005) was an American politician, educator, and author. She was a Congresswoman, representing New York’s 12th Congressional District for seven terms from 1969 to 1983. In 1968, she became the first black woman elected to Congress. On January 25, 1972, she became the first major-party black candidate for President of the United States and the first woman to run for the Democratic presidential nomination (Margaret Chase Smith had previously run for the Republican presidential nomination). She received 152 first-ballot votes at the 1972 Democratic National Convention. [Wikipedia]

Throughout her political career, she worked on behalf of the underdogs—blacks, women, children, inner-city dwellers, and domestic workers. Education, daycare, youth programs, and women’s rights were her favorite issues. She was, as she put it, “unbought and unbossed.” However, she suffered a series of betrayals that left her furious: “I love a good fight and people know [it]… But what hurts me more than anything else… is the brothers in politics…they won’t get off my back.” [Remember the Ladies, Kirsten Olsen] 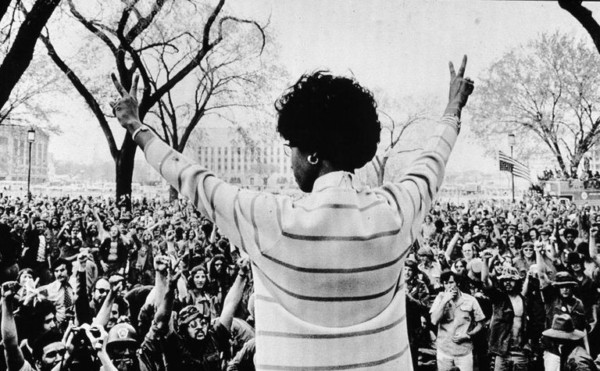 Shirley Anita St. Hill Chisholm (pictured in front of a crowd) was a Brooklyn, New York-born politician and educator whose passion for social justice led her to pursue a career in politics. After four years on the New York state legislature, Chisholm ran as the Democratic candidate for New York’s 12th District congressional seat and won. With her election into the U.S. House of Representatives on Nov. 5, 1968, representing New York for seven terms, she made history as America’s first Black congresswoman.

Originally assigned to the House Forestry Committee, Chisholm switched onto the Veterans’ Affairs Committee and later the Education and Labor Committee. She was known for opposing the military draft and championing for equality in minority education and employment opportunities. During Chisholm’s time in Congress, she hired only women for her office, half of whom were Black. In 1971, Chisholm became one of the founding members of the Congressional Black Caucus.

On Jan. 25, 1972, Chisholm became the first major-party black candidate for president of the United States and the first woman to run for the Democratic presidential nomination. She received 152 first-ballot votes at the party’s national convention that year. However, she lost against George McGovern during the primaries. After she left Congress in 1983, Chisholm taught and lectured at Mount Holyoke College, a women’s liberal arts school in Massachusetts. She died in 2005 at the age of 80.

Rep. James Clyburn on “the Case for Reparations”