Marie Curie (7 November 1867 – 4 July 1934) was a Polish-born French physicist and chemist famous for her work on radioactivity. Whenever you get a little depressed, you can always turn to the story of Marie Curie, who had three strikes against her even before she started her career; she was a woman with an interest in science; she was a Pole living under Russian rule; and she was not wealthy. 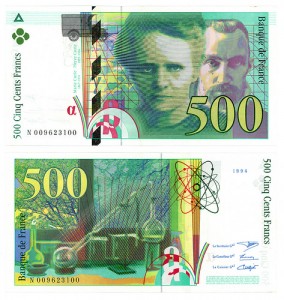 Nevertheless, she discovered radium and polonium, invented the term “radioactivity,” and became the first female professor at the Sorbonne, the first female Nobelist in physics, and the first person of either sex to win two Nobel Prizes. The first step in this remarkable career, was a deal she made with her older sister, Bronia. Each of them wanted a career, and neither could achieve it on her own. So they decided that Marie would work to put Bronia through medical school, and then Bronia would send Marie to the Sorbonne.

All went as planned, although they struggled through years of poverty. Marie graduated with honors in physics and chemistry, and in Paris she met and married physicist Pierre Curie. Before he met Marie, he had decided he would never marry, since women were generally poorly educated, and he wanted an intellectual equal, not a housekeeper. He wanted an exceptional woman with whom he could share his work as well as his love, and he found her in Marie SkJodowska.

The scientific establishment was quick to celebrate Pierre and ignore Marie, but Pierre insisted that his wife be given full credit for her work, and refused the Legion of Honor because at that time it was withheld from women.

Pierre died in 1906, but Marie’s career continued. She went on to win the Noble Prize for chemistry, and during World War One, drove an ambulance to the front lines to x-ray wounded soldiers. She died of leukemia caused by over-exposure to radiation. She wrote, “I mean to get through as well as I can, and when I can do no more, say farewell to this base world. The loss will be small, and regret for me will be short.” [Remember the Ladies, Kirsten Olsen]