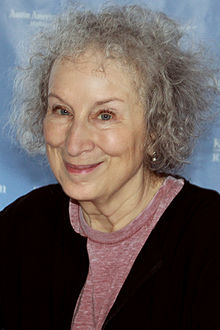 Atwood at the 2015 Texas Book Festival

Margaret Eleanor Atwood, CC OOnt FRSC (born November 18, 1939) is a Canadian poet, novelist, literary critic, essayist, and environmental activist. She is a winner of the Arthur C. Clarke Award and Prince of Asturias Award for Literature, has been shortlisted for the Booker Prize five times, winning once, and has been a finalist for the Governor General’s Award several times, winning twice. In 2001 she was inducted into Canada’s Walk of Fame. She is also a founder of the Writers’ Trust of Canada, a non-profit literary organization that seeks to encourage Canada’s writing community. Among innumerable contributions to Canadian literature, she was a founding trustee of the Griffin Poetry Prize.

Atwood is also the inventor, and developer, of the LongPen and associated technologies that facilitate the remote robotic writing of documents. She is the Co-Founder and a Director of Syngrafii Inc. (formerly Unotchit Inc.), a company that she started in 2004 to develop, produce and distribute the LongPen technology. She holds various patents related to the LongPen technologies.

While she is best known for her work as a novelist, she has also published fifteen books of poetry. Many of her poems have been inspired by myths and fairy tales, which have been interests of hers from an early age. Atwood has published short stories in Tamarack Review, Alphabet, Harper’s, CBC Anthology, Ms., Saturday Night, and many other magazines. She has also published four collections of stories and three collections of unclassifiable short prose works.

Atwood and science fiction
The Handmaid’s Tale received the first Arthur C. Clarke Award in 1987. The award is given for the best science fiction novel that was first published in the United Kingdom during the previous year. It was also nominated for the 1986 Nebula Award, and the 1987 Prometheus Award, both science fiction awards.

Atwood has since said that she does at times write social science fiction and that Handmaid’s Tale and Oryx and Crake can be designated as such. She clarified her meaning on the difference between speculative and science fiction, admitting that others use the terms interchangeably: “For me, the science fiction label belongs on books with things in them that we can’t yet do…. speculative fiction means a work that employs the means already to hand and that takes place on Planet Earth.” She said that science fiction narratives give a writer the ability to explore themes in ways that realistic fiction cannot.

Atwood and feminism
Atwood, who was surrounded by the intellectual dialogue of the female faculty members at Victoria College at University of Toronto, often portrays female characters dominated by patriarchy in her novels.Still, Atwood denies that The Edible Woman, for example, published in 1969 and coinciding with the early second wave of the feminist movement, is feminist and claims that she wrote it four years before the movement. Atwood believes that the feminist label can only be applied to writers who consciously work within the framework of the feminist movement.

Future Library Project
Atwood is the first contributor to the Future Library project. Her novel Scribbler Moon, was completed in 2015 and handed over to the project in a ceremony on 27 May. The book will be held by the project until it is published in 2114. She thinks that readers will probably need a paleo-anthropologist to translate some parts of her story. In an interview with the Guardian newspaper, Atwood said, “There’s something magical about it,” says Atwood. “It’s like Sleeping Beauty. The texts are going to slumber for 100 years and then they’ll wake up, come to life again. It’s a fairytale length of time. She slept for 100 years.”