Mary Edwards Walker (November 26, 1832 – February 21, 1919) was an American feminist, abolitionist, prohibitionist, alleged spy, prisoner of war and surgeon. As of 2016, she is the only woman ever to receive the Medal of Honor.

In 1855, she earned her medical degree at Syracuse Medical College in New York, married and started a medical practice. She volunteered with the Union Army at the outbreak of the American Civil War and served as a surgeon at a temporary hospital in Washington, DC, even though at the time women and sectarian physicians were considered unfit for the Union Army Examining Board. She was captured by Confederate forces after crossing enemy lines to treat wounded civilians and arrested as a spy. She was sent as a prisoner of war to Richmond, Virginia, until released in a prisoner exchange.

After the war, she was approved for the highest United States Armed Forces decoration for bravery, the Medal of Honor, for her efforts during the Civil War. She is the only woman to receive the medal and one of only eight civilians to receive it. Her name was deleted from the Army Medal of Honor Roll in 1917; however it was restored in 1977. After the war, she was a writer and lecturer supporting the women’s suffrage movement until her death in 1919.

Dress Reform
Inspired by her parents’ novel standard of dressing for health purposes, Mary was infamous for contesting traditional female wardrobe. In 1871, she wrote, “The greatest sorrows from which women suffer to-day are those physical, moral, and mental ones, that are caused by their unhygienic manner of dressing!” She strongly opposed women’s long skirts with numerous petticoats not only for their discomfort and their inhibition to the wearer’s mobility, but for their collection and spread of dust and dirt. She began experimenting with various skirt-lengths and layers, all with men’s trousers underneath as a young woman. By 1861, her typical ensemble of choice included trousers with suspenders under a knee-length dress with a tight waist and full skirt. 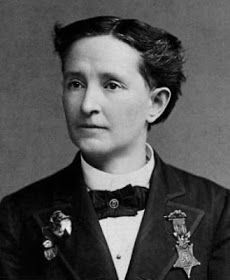 While encouraged by her family, Mary’s wardrobe choices were often met with criticism. As a schoolteacher on her way home, she was assaulted by a neighboring farmer and a group of boys, who chased her and attacked her with eggs and other launched items. Female colleagues in medical school criticized her choices, and patients often gawked and teased her. Nevertheless, Mary was persistent in her mission to reform women’s dress. Her view that women’s dress should “protect the person, and allow freedom of motion and circulation, and not make the wearer a slave to it” made her commitment to dress reform as great as her zeal for abolitionism. She famously wrote to the women’s journal, The Sibyl: A Review of the Tastes, Errors, and Fashions of Society, about her vendetta against women’s fashion, amongst other things, for its causation of poor health, its expense, and its contribution to the dissolution of marriages. Her literature contributed to the spread of her ideas, and made her a popular figure amongst other feminists and female physicians.

Later career
After serving in the war, Walker became disabled. She was awarded a disability pension for partial muscular atrophy while she was imprisoned during the war. She was given $8.50 a month beginning June 13, 1865, but in 1899 that amount was raised to $20 per month.

She became a writer and lecturer, supporting such issues as health care, temperance, women’s rights, and dress reform for women. She was frequently arrested for wearing men’s clothing and insisted on her right to wear clothing that she thought appropriate. She wrote two books that discussed women’s rights and dress. She replied to criticism of her attire: “I don’t wear men’s clothes, I wear my own clothes.”

Walker supported the women’s suffrage movement. She was a member of the central woman’s suffrage Bureau in Washington. During her time as a member, she solicited funds to endow a chair for a woman professor at Howard University medical school. Walker attempted to register to vote in 1871, but was turned away. The initial stance of the movement, taking Dr. Walker’s lead, was to claim that women already had the right to vote, and Congress needed only to enact enabling legislation. After a number of fruitless years advocating this position, the movement promoted the adoption of a constitutional amendment. This was diametrically opposed to Mary Walker’s position, and she fell out of favor with the movement. She continued to attend conventions of the suffrage movement and distribute her own brand of literature, but was virtually ignored by the rest of the movement. Her penchant for wearing male-style clothing, including a top hat, only exacerbated the situation. She received a more positive reception in England than in the United States.

In 1907, Walker published a work on “Crowning Constitutional Argument.” Walker argued that some states, as well as the Constitution, had already granted women the right to vote. She testified on women’s suffrage before committees of the U.S. House of Representatives in 1912 and 1914.

After a long illness, Walker died at home on February 21, 1919, from natural causes at the age of 87 and is buried in Rural Cemetery in Oswego, New York. She had a plain funeral with an American flag draped over her casket. She was buried in her black suit instead of a dress. Her death in 1919 came one year before the passage of the Nineteenth Amendment to the United States Constitution, which guaranteed women the right to vote.