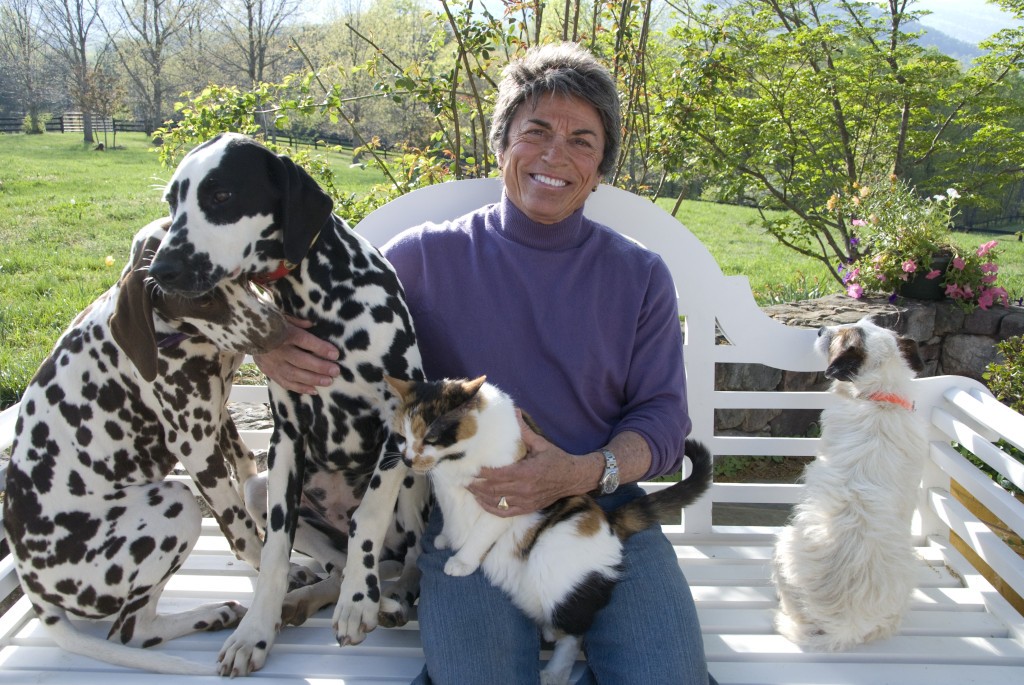 Rita Mae Brown with her animals

Rita Mae Brown (born 28 November 1944) is an American writer and feminist. She is best known for her first novel Rubyfruit Jungle. Published in 1973, it dealt with lesbian themes in an explicit manner unusual for the time. Brown is also a mystery writer and screenwriter.

Rita Mae Brown is the New York Times bestselling author of the Mrs. Murphy mystery series (which she writes with her tiger cat, Sneaky Pie) and the Sister Jane novels, as well as Rubyfruit Jungle, In Her Day, Six of One, The Sand Castle, and the memoirs Animal Magnetism and Rita Will. An Emmy-nominated screenwriter and a poet, Brown lives in Afton, Virginia, with cats, hounds, horses, and big red foxes.

Political activism
During Brown’s spring 1964 semester at the University of Florida at Gainesville, she became active in the American Civil Rights Movement. Later in the 1960s, she participated in the anti-war movement, the feminist movement and the Gay Liberation movement.

Brown took an administrative position with the fledgling National Organization for Women, but resigned in January 1970 over Betty Friedan’s anti-gay remarks and NOW’s attempts to distance itself from lesbian organizations. She claims she played a leading role in the “Lavender Menace” zap of the Second Congress to Unite Women on 1 May 1970, which protested Friedan’s remarks and the exclusion of lesbians from the women’s movement.

In the early 1970s, she became a founding member of The Furies Collective, a lesbian feminist newspaper collective in Washington, DC, which held that heterosexuality was the root of all oppression.

Brown told Time magazine in 2008, “I don’t believe in straight or gay. I really don’t. I think we’re all degrees of bisexual. There may be a few people on the extreme if it’s a bell curve who really truly are gay or really truly are straight. Because nobody had ever said these things and used their real name, I suddenly became [in the late 1970s] the only lesbian in America.”