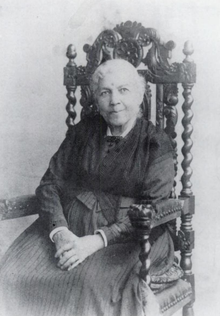 Harriet Ann Jacobs (February 11, 1813 – March 7, 1897) was an African-American writer who escaped from slavery and was later freed. She became an abolitionist speaker and reformer. Jacobs wrote an autobiographical novel, Incidents in the Life of a Slave Girl, first serialized in a newspaper and published as a book in 1861 under the pseudonym Linda Brent. It was a reworking of the genres of slave narrative and sentimental novel, and was one of the first books to address the struggle for freedom by female slaves, and to explore their struggles with sexual harassment and abuse, and their effort to protect their roles as women and mothers.

After being overshadowed by the Civil War, the novel was rediscovered in the late 20th century, when there was new interest in minority and women writers. One scholar researched the novel, identifying Harriet Jacobs as the author and documenting many events and people in her life that corresponded to this fictionalized, autobiographical account. The novel has been the subject of many academic studies, as Jacobs challenged prevailing ideas about slavery and womanhood in her work.

Harriet Jacobs was born into slavery in Edenton, North Carolina, in 1813. Her father was Elijah Knox, an enslaved biracial house carpenter owned by Andrew Knox. Elijah was said to be the son of Athena Knox, who was enslaved, and a white farmer, Henry Jacobs. Harriet’s mother was Delilah Horniblow, an enslaved black woman held by John Horniblow, a tavern owner. Under the principle of partus sequitur ventrem, both Harriet and her brother John were born into slavery, as their mother was enslaved. Their likely European-American paternity did not alter their status. Harriet lived with her mother until Delilah’s death around 1819, when Harriet was six. Then she lived with her mother’s mistress, Margaret Horniblow, who taught Harriet to read, write and sew.

Three months before she died in 1825, Jacobs’ mistress Margaret Horniblow had signed a will leaving her slaves to her mother. Dr. James Norcom and a man named Henry Flury witnessed a later codicil to the will directing that the girl Harriet be left to Norcom’s daughter Mary Matilda, Horniblow’s five-year-old niece. The codicil was not signed by Margaret Horniblow. Norcom became Harriet’s de facto master.

Norcom sexually harassed Harriet when she came of age. He refused to allow her to marry, regardless of the man’s status. Hoping to escape his attentions, Jacobs took Samuel Sawyer, a free white lawyer, as a consensual lover. Sawyer was later elected as a member of the US House of Representatives. With Sawyer, she had two children, Joseph and Louisa. Because she was enslaved, their biracial children were born into slavery and Norcom was their master. Harriet later wrote that Norcom threatened to sell her children if she refused his sexual advances, but she continued to evade him. 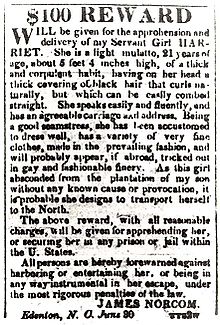 Reward notice issued for the return of Harriet Jacobs

By 1835 her domestic situation had become unbearable, and Jacobs managed to escape. She hid in the home of a slaveowner in Edenton to keep an eye on her children. After a short stay, she took refuge in a swamp called Cabarrus Pocosin. She next hid in a crawl space above the ceiling of her grandmother Molly’s shack.

Jacobs lived for seven years in her grandmother’s attic before escaping in 1842 to the North by boat to Philadelphia, Pennsylvania. Sawyer had purchased their two children from Norcom. He let them live with Jacobs’ grandmother but he did not free them. The state had made manumissions difficult following the Nat Turner slave rebellion of 1831. While in hiding, Jacobs had glimpses of her children from the attic and could hear their voices.

Jacobs escaped to the North in 1842, where she was taken in by anti-slavery friends from the Philadelphia Vigilant Committee. They helped her get to New York in September 1845. There she found work as a nursemaid in the home of Nathaniel Parker Willis and made a new life. She was also able to reunite with her daughter, Louisa, who had been sent to New York at a young age to work as a “waiting-maid.” By 1827, the last slaves had been freed in New York under its gradual abolition law.

In 1845, Jacobs’ employer Mary Stace Willis died. Jacobs continued to care for Mary’s daughter Imogen and to assist the widower Nathaniel Willis. In January she traveled to England with him and his daughter. In letters home, Jacobs claimed there was no prejudice against people of color in England. After returning from England, Jacobs left her employment with the Willises. She moved to Boston to visit with her daughter, son and brother for ten months. Her brother, John S. Jacobs, who had also escaped and was part of the anti-slavery movement, decided to open an anti-slavery reading room in Rochester, New York in 1849. The black abolitionist, Frederick Douglass, was active in Rochester and it was a center of anti-slavery activities among whites as well.

John Jacobs found a school for Louisa and by November 1849, she was attending the Young Ladies Domestic Seminary School located in Clinton, New York. The school was founded in 1832 by abolitionist Hiram Huntington Kellogg. In 1849 Jacobs joined her brother in Rochester, where she met Quaker Amy Post. Amy and her husband Isaac Post were staunch abolitionists. As Jacobs became part of the Anti-Slavery Society, she became very politicized. She helped support the Anti-Slavery Reading Room by speaking to audiences in Rochester to educate people and to raise money.

On October 1, 1850, John S. Jacobs’ speech was quoted in Meetings of Colored Citizens. Following Congressional passage of the Fugitive Slave Act of 1850, both John and Harriet Jacobs feared for each other’s safety, as legally they were still escaped slaves. The new law increased pressure to capture escaped slaves and required cooperation from officials and citizens of free states. The Jacobs’ siblings left Rochester and returned to New York City. Furious about the act, John wanted to leave the country. When he heard that the new state of California did not enforce the act, he decided to go there. He worked in the gold mines during the Gold Rush, where he was joined in 1852 by Joseph Jacobs, Harriet’s son and his nephew.

On February 29, 1852, Harriet Jacobs was informed that Daniel Messmore, the husband of her young legal mistress Mary Matilda (Norcom) Messmore, had checked into a hotel in New York. To avert the risk of Jacobs being kidnapped, Cornelia Grinnell Willis (Willis’ second wife) took Harriet and the Willis baby to a friend’s house where they hid. Cornelia Willis encouraged Jacobs to take the baby and go to Willis relatives in Massachusetts. Without Jacobs’ knowledge, Cornelia Willis paid $300 to Messmore for the rights to Harriet and gave Jacobs her freedom. Jacobs returned to New York with the Willis child.

Writing her memoir and other work
In late 1852 or early 1853, Amy Post suggested that Jacobs should write her life story. She also suggested that Jacobs contact the author Harriet Beecher Stowe, who was working on A Key to Uncle Tom’s Cabin. When Stowe wanted to use Jacobs’ history in her own book, Jacobs decided to write her own account. She wrote secretly at night, in a nursery in the Willis’ Idlewild estate.

In June 1853, Jacobs wrote a letter in response to an article in the New York Tribune by former First Lady Julia Tyler, called “The Women of England vs. the Women of America”. Her letter was Jacobs’ first published work. As Tyler referred to the lives of enslaved women in the United States, Jacobs believed she had the right to comment, as she had lived that life.

Over the next several years, Jacobs continued to write her memoir, as well as letters to newspapers. In 1854, as Nathaniel Parker Willis was downstairs writing Out-doors at Idlewild; Or, The Shaping of a Home on the Banks of the Hudson, Jacobs was upstairs completing her own manuscript. Jacobs changed the names of all the people she depicted, including her own, to conceal their true identities and protect them from any adverse reaction. The slave owner “Dr. Flint” was based on Jacobs’ former master, Dr. James Norcom.

In 1856, Jacobs’ daughter Louisa became a governess in the home of James and Sara Payson Willis Parton (Sara was the sister of Nathaniel Parker Willis; she later became known as a writer, under the pen name of Fanny Fern.(Wikipedia)

“It is painful for me, in many ways, to recall the dreary years I passed in bondage. I would gladly forget them if I could.”

For a short time Harriet and her brother worked in Rochester, N.Y. in the Anti-Slavery Office and Reading Room, where they became acquainted with Frederick Douglass, Amy Post and other abolitionists. With Amy’s encouragement, Harriet began writing Incidents in 1853. When attempts to have the book published failed, she had it “printed for the author” in 1861. The British edition, The Deeper Wrong, was published the following year.

During most of the 1860s, Harriet performed relief work, first nursing black troops and teaching, and later, assisted by Louisa Matilda, aiding freedmen in Washington, D.C., Savannah, GA., and Edenton. For a time, she ran a boarding house in Cambridge, MA. Later, Harriet and her daughter lived in Washington, D.C., where Louisa Matilda participated in organizing meetings of the National Association of Colored Women.

Harriet died in Washington on March 7, 1897, and was buried next to her brother in Mount Auburn Cemetery, Cambridge. (Harriet Jacobs.com)