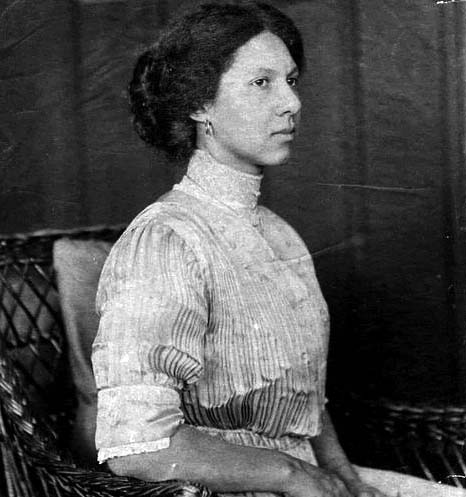 Meta Vaux Warrick Fuller (June 9, 1877 – March 18, 1968) was an African-American artist notable for celebrating Afrocentric themes. At the fore of the Harlem Renaissance, Warrick was known for being a poet, painter, and sculptor of the black American experience. At the turn of the 20th century, she had achieved a reputation as a well-known sculptor in Paris, before returning to the United States. Warrick was a protegée of Auguste Rodin, and has been described as “one of the most imaginative Black artists of her generation.” Through adopting a horror-based figural style and choosing to depict events of racial injustice, like the lynching of Mary Turner, Warrick used her platform to address the societal traumas of African-Americans.

Fuller was born to William and Emma Warrick, who owned a barbershop and was an accomplished wig maker and beautician for upper-class white women. Her father owned several barber shops and her mother owned her own beauty salon. Warrick was, in fact, named after Meta Vaux, the daughter of Senator Richard Vaux, one of her mother’s customers. Her maternal grandfather, Henry Jones, was a successful caterer in the city. Both of her parents were considered to have influential positions in African-American society.

Her family’s class status was a special privilege that was afforded to them through their talent and their location. After an influx of free blacks began making a home in Philadelphia, the available jobs were generally physically hard and low-paying. Only a few people were able to find desirable jobs as ministers, physicians, barbers, teachers, and caterers. During the Reconstruction, due to racism, legalized racial segregation laws, including Jim Crow laws limited the social progress of African Americans into the 20th century. Despite this, Warrick’s parents were able to find creative success amongst the “vibrant political, cultural, and economic center” the African American community of Philadelphia had established. As a young child, she exhibited artistic skills, and her talent was recognized and encouraged. She was 10 years younger than her siblings and given great encouragement to pursue her passions.

Due to her parent’s success, she was given access to various cultural and educational opportunities. Warrick trained in art, music, dance, and horseback riding. Warrick’s art education and art influences began at home, nurtured from childhood by her older sister Blanche, who studied art, and visits to Pennsylvania Academy of the Fine Arts with her father, who was interested in sculpture and painting. Her older sister, who later became a beautician like their mother, kept clay that Meta was able to use to create art. She was enrolled in 1893 in the Girls’ High School in Philadelphia, where she studied art as well as academic courses. Warrick was among the few gifted artists selected from the Philadelphia public schools to study art and design at J. Liberty Tadd’s art program at the Pennsylvania Museum and School of Industrial Art in the early 1890s.

Her brother and grandfather entertained and fascinated her with endless horror stories. These influences partly shaped her sculpture, as she eventually developed as an internationally trained artist known as “the sculptor of horrors.”

In 1901, Fuller was invited to visit the studio of Auguste Rodin. During her visit, she brought along a recent piece of her work in the hopes that Rodin would accept her as one of his students. Although she was never formally apprenticed under the French master, he became a close friend and vital advocate for Fuller, introducing her to many of the most influential members of the Parisian art community.

Fuller met activist W.E.B. Du Bois for the first time while in Paris. Du Bois became a lifelong champion of Fuller’s work and suggested at their initial meeting that she use her black roots as subject matter for her work. At first, she resisted this suggestion, feeling that it would limit the scope of her work. But as she became more interested in Rodin’s expressive use of human emotion, Fuller returned again and again to impassioned depictions of black figures in harsh situations. Her sculpture Laughing Man, which was included in the 1902 Victor Hugo Centennial exhibition, explored white stereotypes of Blacks.

W.E.B. Du Bois asked Fuller to create a work for the 50th-anniversary celebration of the Emancipation Proclamation in 1913. The final piece, Spirit of Emancipation, marked a subtle but vital shift in Fuller’s work. Instead of employing literal images of slavery, this piece focused on universal ideas of freedom and liberty.

In the late 1960s, Fuller completed The Crucifixion to commemorate the death of four girls in the bombing of the Sixteenth Street Baptist Church in Birmingham, Alabama. Fuller continued to create sculptures until her death at age 90, on March 18, 1968.