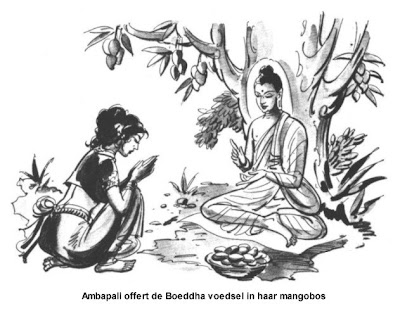 Ambapali, also known as “Ambapalika” or “Amrapali”, was a nagarvadhu (royal courtesan) of the republic of Vaishali in ancient India around 500 BC. Following the Buddha’s teachings she became an Arahant. She is mentioned in the old Pali texts and Buddhist traditions, which most notably mention Buddha staying at her Mango grove, Ambapali vana which she later donated to his Order, and wherein he preached the famous Ambapalika Sutta. ~ Wikipedia

…by charging outlandish prices for her services, she amassed a huge personal fortune with which she bought a lavish home and some mango groves. When the Buddha passed through Vaisali, he visited Ambapali, and he apparently made quite an impression on her.…she became an arhat, or holy one—quite a feat since few men ever achieved this state—which is as far as a human could go without actually being the Buddha or achieving nirvana.…It was believed at the time that only men could attain nirvana. ~Remember the Ladies, Kirstin Olsen. The Main Street Press, 1988