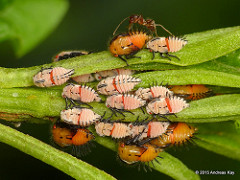 Governments and businesses need an overhaul of policies and strategies to respond to the rapid loss of nature’s riches, worth trillions of dollars but long taken for granted, a U.N.-backed study said on Wednesday. Damage to natural capital including forests, wetlands and grasslands is valued at $2-4.5 trillion annually, the United Nations estimates, but the figure is not included in economic data such as GDP, nor in corporate accounts.

That “invisibility” needs to change so steps can be taken to save ecosystems that are a vital source of food, water and income, said Pavan Sukhdev, study leader for The Economics of Ecosystems and Biodiversity (TEEB), a U.N.-backed initiative.

“We can not treat this lightly,” he told a news conference on the sidelines of an Oct 18-29 U.N. meeting in Nagoya, Japan, where envoys from nearly 200 countries are aiming to set targets for 2020 to fight losses in biological diversity.
“Unfortunately, the lack of an economic lens to reflect these realities, has meant that we have treated these matters lightly, that they are not center-stage when it comes to policy discussions nor center-stage when it comes to business discussions.”

Sukhdev, on secondment from Deutsche Bank, unveiled the final installment of several TEEB reports that analyze the value of nature, including forests that clean the air, bees that pollinate crops and coral reefs that are home to millions of species. For example, halving deforestation rates by 2030 would cut damage from climate change estimated at more than $3.7 trillion, while Swiss bee colonies ensured yearly agricultural production worth $213 million by providing pollination, the report said.

SAME COIN
Destruction of coral reefs was not only damaging to marine life but also posed risks to communities, the report said. Some 30 million people are reliant on reef-based resources for food production, incomes and livelihoods.

“It has exacerbated the suffering of human beings, especially of those at the bottom of the economic pyramid,” Sukhdev said. “Development and biodiversity cannot be seen as competing choices. They are not only the same coin but they are literally the same side of the same coin.”

The report highlighted recommendations for policymakers, such as the need to include the value of nature and the role of ecosystems in national accounts. Businesses must disclose values in their annual reports and accounts, it said. Emerging economies Brazil and India threw their support behind the U.N. effort, saying they would use the TEEB findings as a guide.

“At a national level we are in discussion to implement a TEEB study of our natural capital, and the Brazilian business sector is also in planning to move toward this practical and sustainable approach to decision-making,” Braulio Dias, secretary for biodiversity and forests at Brazil’s environment ministry, said in a statement.

Putting a price on the role of nature has been a major focus at the Nagoya talks on biodiversity, an issue that environmental groups say has so far received far less attention from policymakers and the public than climate change.

“The conservation community has a translation problem,” said Andrew Deutz, director of international government relations at The Nature Conservancy. “We’ve spent decades talking about habitat degradation and species loss. The people who run the world talk in terms of economic growth and employment rates. This report could be our Rosetta Stone.”