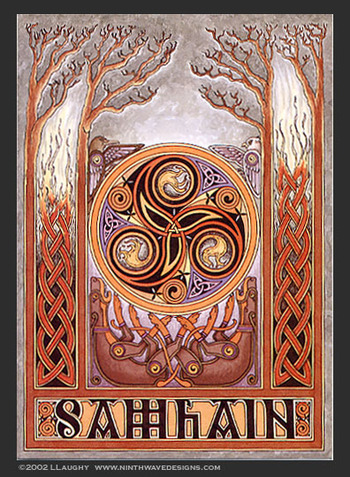 Our Halloween rituals are relics of the pagan All Hallows Eve, the original nighttime festival according to the lunar calendar, preceding the solar-calendar daytime version that was Christianized as “All Saints,” The festival used to be the Feast of the Dead (Celtic Samhain, or Vigil of Saman). It was perhaps the most important of the cross-quarter days, when the “crack between the worlds” would open up and let the spirits pass through. Therefore the ghosts of dead ancestors could revisit the earth, join their descendants at the feast, and give necromantic interviews and omens.

In Ireland, all the sidh or fairy hills (grave mounds) were said to open up for the occasion. Folks insisted that it was impossible to keep the fairies underground on Halloween. Since these “fairies” were simply pagan spirits, the church naturally insisted that demons were abroad on Halloween, summoned by witches, which was the usual term for the ancicnt pagan priestesses whose business it was to communicate with the dead. (1)

Halloween trick-or-treat customs descended frum a belief that the family dead would bring gifts or goodies to the children during their temporary return from the other world. Gifts, food, and sweets were always the standard method of attracting children’s attention to religious holidays, as is still shown by our own Christmas and Easter customs. Thus, “the dead relations have become the good fairies of the little ones.”(2) Black cats, owls, bats, and broomsticks were the familiar spirits and tools commonly associated with witches, who retained a dominant position in the Feast of the Dead despite the church’s attempt to assimilate it in honor of its own canon of saints.