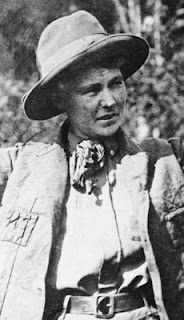 Delia Julia Akeley (1875 – 1970), commonly known by her nickname, Mickie, was an American explorer. She was born in Beaver Dam, Wisconsin, a daughter of Patrick and Margaret (Hanberry) Denning, Irish immigrants.

In 1902, Delia married the taxidermist, artist and inventor Carl E. Akeley, who conceived the African Hall at the American Museum of Natural History in New York where he introduced and oversaw the creation of many of its famous dioramas. He earlier worked at the Field Museum of Natural History, of Chicago. Delia accompanied Carl on expeditions to hunt and retrieve specimens central to the most important displays in the African sections of both museums. In Kenya, when hunting the elephants that were to form the most important of all the displays in the African Hall of the American Museum of Natural History, Carl Akeley was attacked by a Bull Elephant while out hunting with a team of his porters and helpers. They panicked and ran thinking he was done for.

But, Carl Akeley survived, in no small part because his wife Delia traveled back to his body with two porters who had initially fled in terror [“Jungle Portraits”, “Jungle Rescue,” pp 249-249, by Delia Akeley, MacMillan 1930]. He was seriously injured, but Delia got him to a hospital after a dangerous portage in mountainous country. She also nursed him back from the brink of death on at least one other occasion when he would have succumbed to blackwater fever2. In 1920, after Carl’s surviving a bout with blackwater fever, the Akeleys returned to New York accompanied by a captivating monkey by the name of “J.T. Jr.” who had become a very close pet to the Akeleys during their last expeditions in Kenya. In New York, while Carl Akeley kept himself quite occupied in fund raising on behalf of the museum, and sculpting models for his dioramas, he also was introduced to Mary Jobe, a debutante, and Bryn Mawr graduate who had become an African explorer and ethnographer.

Delia, meanwhile became increasingly occupied with the care and study of J.T. who was an extremely bright and jealous primate. It is unclear as to which matters precipitated which behaviors, but tensions grew between the Akeleys, and an acrimonious divorce occurred in 1923. Carl married his second wife, Mary when he was sixty, and she was 38 in 1924. Delia was 53 at the time. Carl Akeley returned to Africa to hunt and study the mountain gorillas with his new wife Mary. In 1926 Carl contracted what has been described as dysentery but involved aggressive progression and aggressive bleeding from all orifices (possibly undiagnosed Ebola) he died on expedition. Of the African elephants that make up the famous group that is the central display in the African Hall at the American Museum of Natural History, one of the family African elephants there was shot by Delia. 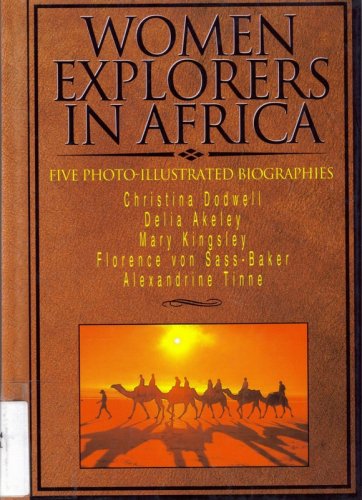 Carl Akeley died in 1926. In 1924, after their divorce, Delia continued to travel widely in Africa leading her own expeditions and concentrating more on the ethnography of the more reclusive tribes such as the Forrest People pygmies [Jungle Portraits, Akeley, Delia, J., 1930, MacMillan, pp. 159-229]. She was one of the first westerners to explore the desert between Kenya and Ethiopia, and she explored the Tana River in a dugout canoe, entering it from the Indian Ocean. She also lived for several months with the pygmies of the Ituri Forest, Zaire.

Delia Akeley died in 1970 at the age of 95. Her autobiographical works include Jungle Portraits and All True!. She was also one of the first authors to write a non-anthropomorphic but psychologically insightful biography of another primate: “J.T. Jr.” The Biography of an African Monkey.

Together with Christina Dodwell, Mary Kingsley, Florence Baker, and Alexandrine Tinne, she was one of the five subjects of a book by Margo McLoone, Women explorers in Africa (1997). [Wikipedia]