Kyrgyz President Roza Otunbaeva has been awarded one of 10 International Women of Courage honors given out by the U.S. State Department. 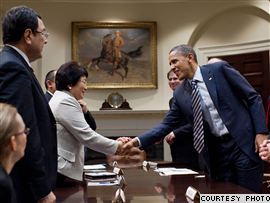 U.S. Secretary of State Hillary Clinton praised Otunbaeva’s efforts, saying, “This is a woman who I think can stand as an example to many leaders around the world about what democracy and power should be used for, to help the people that you are supposed to serve.”

Otunbaeva recently became the first female head of state in Central Asia. She has been leading efforts to impose order in her country, which has been plagued by ethnic violence and political chaos since last year’s ouster of former President Kurmanbek Bakiev.

Other honorees this year include Maria Bashir, the prosecutor general in Afghanistan’s Herat Province; Nasta Palazhanka, the deputy chair of the Malady Front (Young Front) nongovernmental organization in Belarus; and Ghulam Sughra, founder and chief executive officer for the Marvi Rural Development Organization in Pakistan.

An Uzbek woman who received the same honor in 2009 has stated publicly that she will return her award to protest Otunbaeva’s inclusion, accusing her of failing to prevent bloodshed that in most cases targeted ethnic Uzbeks in June 2010.

Most Women in Their 40s Shouldn’t Get Mammograms