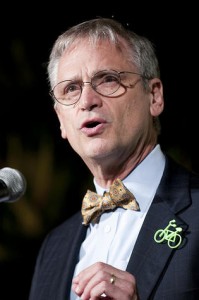 What is a sensible political reaction to rising gas prices? Standing around shouting “Drill, baby, drill”? Or offering material support to commuters who increasingly opt for public transportation or biking to work?

Rep. Earl Blumenauer (D-Ore.), who often sports a bike pin in his lapel (and rides a bike to work himself), is taking the second approach. This week he is introducing legislation that would help people who want to drive less — without costing the government any more money. His proposal is the Commuter Relief Act. It would expand tax credits “for individuals and employers to make it easier for commuters who wish to commute to work by bicycle, walking, carpooling, or using public transit.”

Specifically, the bill would equalize the parking and transit benefits at $200 per month; let people claim benefits for more than one mode of transportation; and allow employees the option to take cash instead of an employer’s parking benefit, “reducing the incentive to drive instead of take alternative transportation.” It would also increase the current bike benefit (which Blumenauer got passed back in 2009) from $20 to $40 per month.

Blumenaur gave me a call last week to discuss the legislation.

“Our goal is to lay out a budget-neutral alternative that gives people some choices,” he said. “One of my favorite options here is giving people the opportunity to cash in their employer-provided parking. Giving a commuter the opportunity to say, I’d like to take that money and buy a bike and a bus pass and enrich my life and my health.”

He acknowledges that bike commuting isn’t for everyone. But he says that acknowledging bicycles as a legitimate transportation option is an important step. “Will everybody do it? No,” he said. “But it’s an affirmation of people’s choices. And giving people choices … These are things that slowly but surely, they don’t tilt the playing field, but they level it.”

I asked Blumenauer what kind of pushback he expects on the legislation.

“There are some people for whom the symbolism bothers them,” he told me. “They try to portray it as anti-car—or that we’re trying to socially engineer. As if there’s no social engineering involved if you have lavish subsidies for the single-occupant automobile commuter and little or no commensurate benefit for people who burn calories instead of fossil fuel.”