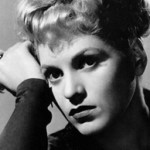 Holliday began her career as part of a night-club act, before working in Broadway plays and musicals. Her success in the 1946 stage production of Born Yesterday as “Billie Dawn” led to her being cast in the 1950 film version, for which she won the Academy Award for Best Actress and the Golden Globe Award for Best Actress – Motion Picture Musical or Comedy. She appeared regularly in film during the 1950s. She was noted for her performance on Broadway in the musical Bells Are Ringing, winning a Tony Award for Best Performance by a Leading Actress in a Musical and reprising her role in the 1960 film. [ad#234x60_halfBanner]

In 1952, Holliday was called to testify before the Senate Internal Security Subcommittee to answer claims that she was associated with communism. She pretended to be a lovable scatter-brain and led her questioners in circles of illogic and forgetfulness. Finally, convinced she was really and idiot, they let her go without getting a single piece of useable information from her—never realizing that they’d been the victims of a masterful joke. Although not blacklisted from films, she was blacklisted from radio and television for almost three years. 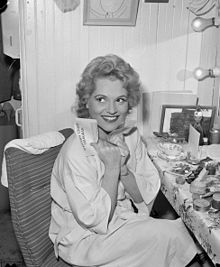 A comedienne of great intelligence and intuitive precision.

In November 1956 she returned to Broadway starring in the musical Bells Are Ringing with book and lyrics by her Revuers friends, Betty Comden and Adolph Green, and directed by Jerome Robbins, for which she won the 1957 Tony Award for Best Leading Actress in a Musical. In 1960 she starred in the film version of Bells Are Ringing. Of her performance in the stage musical, Brooks Atkinson wrote in The New York Times: “Nothing has happened to the shrill little moll whom the town loved in Born Yesterday. The squeaky voice, the embarrassed giggle, the brassy naivete, the dimples, the teeter-totter walk fortunately remain unimpaired…Miss Holliday now adds a trunk-full of song-and-dance routines…Without losing any of that doll-like personality, she is now singing music by Jule Styne and dancing numbers composed by Jerome Robbins and Bob Fosse. She has gusto enough to triumph in every kind of music hall antic.” In 1956 she starred in the film The Solid Gold Cadillac.

In October 1960 she had started out-of-town tryouts on the play Laurette, based on the life of Laurette Taylor. The show was directed by José Quintero, with background music by Elmer Bernstein and produced by Alan Pakula. When Holliday became ill and had to leave the show, it closed in Philadelphia without opening on Broadway. She had throat surgery shortly after leaving the production, in October 1960.

Holliday’s last role was in the stage musical Hot Spot, which closed after 43 performances on May 25, 1963. [Wikipedia]